Flier for a performance of The Orgones, Codename: Candysnatch, and Aphrodisiac Planecrash at The Bottle Rocket on February 23rd, 2001

In the early 2000s two Bowling Green, Ohio, artists, Heather Revill and Kaela Thomas, had a strong presence in both Bowling Green and Toledo music scenes, performing in venues such as The Bottle Rocket in Toledo and Howard's Club H in BG.

Their first group was a  feminist punk band called Codename: Candysnatch, from 2000 to 2002, after Thomas' first group, The Nastys, disbanded.  Thomas and Revill then formed  The Cupcakes (2001-2005). The Cupcakes described themselves as having the sound of a classic  ‘girl group’. 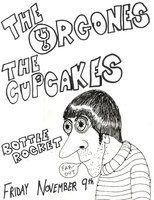 Flier for a performance of The Orgones and The Cupcakes at The Bottle Rocket on November 9, 2001 in Toledo, Ohio

When guitarist and singer Cory Andricks (who also formed the band The Dumb Easies with Revill and Thomas) joined the Cupcakes they maintained the girl group moniker with this explanation from the Dumb Easies website "There was a general consensus that Cory, being gay, would not taint the integrity of the ‘girl-group’ concept, and he didn’t."

Flier for The T-Shirts, The Cyril Lords, and The Crown Jewels at Howard's Club H, on February 28, 2004

The Dumb Easies began in 2005 and continued through 2012. During that time Andricks, Revill and Thomas also performed with other groups in the Bowling Green and Toledo area including Hot Love, The Matt Truman Ego Trip, and The Wigfur Allstars. Kaela Thomas and her husband Jason also performed in The Crown Jewels and The French.