Flier for a Groovemaster performance at Soft Rock Cafe in Bowling Green, Ohio in 1989. 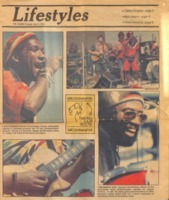 1991 Article on Groovemaster in the The Courier.

Musically, the 1980s saw a blend of cultures, genders, and demographics as World Music gained in popularity. In Bowling Green, Ohio, the Reggae group, Groovemaster, attracted  audiences on and off BGSU campus, as well as in Toledo, Ohio. The group, which played throughout the Northwest Ohio area from 1987-1991, included Damon Arterbridge, Linda Gurney, Jose Luna, Bruce MacLaughlin, Don Morrow, Mike Nemeth, Gaylord Richardson, and Julie Richardson, and had attracted media attention, including an article in the August 6th, 1991, newspaper The Courier, by Keith Ammon in Findlay, Ohio.

Pictured here are photographs from Groovemaster events in the Northwestern Ohio region including at the Commons on the BGSU main campus in 1987 (demolished in 2011 allow for the construction of Carillon Place), and the Portside Festival Marketplace, a shopping mall along the Maumee River in Toledo, Ohio, that closed in 1990.