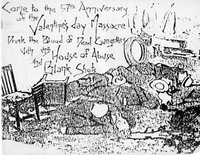 Flier for HOA and Blank Schatz at The House of Abuse in Bowling Green, Ohio on 2/14/86 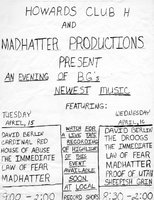 The late 1980s and early 1990s in the Northwest Ohio region was a time of experimentation musically, with vibriant and imaginative art punk and noise bands playing at various clubs on Main Street on BGSU campus such as Escaped Fetal Pigs, Assignment Moongirl, and HOA with vocalist Maria Weber, and its sucsessor XHOA with female artist Terri Wietecha on keyboard, vocals, and Beat Machine. 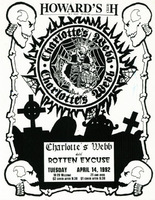 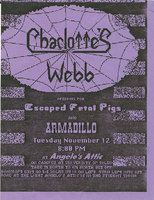 Flier image for Charlotte's Webb, Escaped Fetal Pigs, and Armadillo at Angelo's Attic in the University of Toledo Student Union on 11/12/91

Charlotte's Webb played their first show on Halloween 1991 at Easystreet Cafe in downtown Bowling Green, followed by shows at Angelo's Attic at the University of Toledo, and the BGSU campus venue, The Commons.

The band experimented with punk, metal, hip hop, and recorded an album in early 1993. The band's final show was in the summer of that same year, due, according to vocalist Matt Duncan, to "creative differences."

Swenson went on to form Five-Story Fall which disbanded in the mid-1990s. 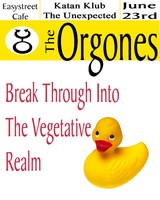 Flier for The Orgones, Katan Klub, and The Unexpected at Easy Street Cafe on 6/23/2000

Flier for The Unexpected at Easystreet Cafe on 06/23/00

another 1990 group from Bowling Green, Ohio, The Unexpected, with members Dan Stutzman on bass, William “BJ” Price on guitar and vocals, guitarist Becky Skrvat, and The Reverend Johnny Delicious, who was also in the experimental noise group Assignment Moongirl.