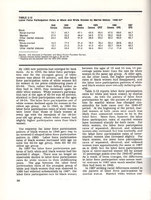 The piece that I have picked to analyze on the topic of “Women in The Civil Rights Movement” is a piece which explains the economic status of black women in the civil rights movement. This artifact shows how unfairly women were treated within the workforce and how they were denied equal opportunities compared to white women. As shown in table 2.8 it compares the labor force participation rate between black females and white females. This table illustrates that from the year 1940 to the year 1971 there were a much larger amounts of African American females participating in the labor force compared to white females, signifying that there was a larger portion of black females searching for a job or actively holding a position. However, when looking at table 2.1 it illustrates that the unemployment rate for black females was significantly higher than white female’s unemployment rate, suggesting it was preferred to hire a white female over a black female. While further analyzing this artifact it is easy to notice that figure 2.7 illustrates inequality of wage. This table explains the ratio of hourly wage of a black female and a white female. It is evident that black females had earned significantly less than white females and sometimes reaching ratios of 2:1. During this time it was very common that jobs would pay employees on an hourly basis and as figure 2.9 illustrates, that black women would work less hours on average than white women and many times falling just short of being considered a full time employee which would not entitle them to any benefits provided.

From this artifact, it is clear how African American women were discriminated against in the economic system during the time of the civil rights movement. However, as civil rights activism had begun to grow, black women were often lost in the arguments. Eventually nearing the 1970’s, many black women’s rights activist started to branch from the typical activist groups, such as those as the Black Panther Party, and begun to create their own groups focusing on black feminism. Such groups included Combahee River Collective, which focused on the political and economic status of African American women as well as the National Black Feminist Organization, which focused on various points of black feminism. As time and activism has continued, equality has become more apparent However, it still is present in the modern day.