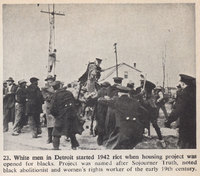 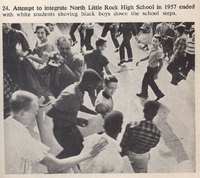 In the first image, White men were angry that a housing project for African Americans opened up in Detroit in 1942 so they began to riot.

In the second image, White students at North Little Rock High School in Little Rock, Arkansas are angry that some African American students have been integrated into the school in 1957. The White students proceed to shove them down the stairs in the photo.