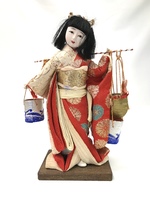 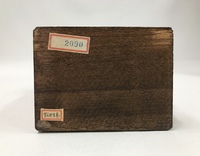 This Japanese doll was made by the Kyoto Doll Exchange in mid-twentieth century Japan. A type of costume doll, it depicts a young girl as a "shiokumi," a salt-scooper who carries seawater to makes salt. She is wearing a kimono and a headpiece, and she is carrying a yoke across her back with wave-painted pails. This is the typical costume of a "shiokumi," which is rooted in Japanese culture and folklore.

The doll head is plastic and painted to appear in a skin tone. Both the eyebrows and the mouth are hand painted. The mouth is closed, and the eyes do not open/close. The eyes are brown, made of glass, and embedded in the head. The hair is a black, synthetic wig that is sewn into the doll. The feet and hands are painted wood, and the thumb of the left hand is broken off.

The doll is wearing a traditional Japanese kimono that is made of brocaded silk. Primarily red and gold, it features an elaborate design with flowers of varying colors (aqua, pink, white, gold). It is not a single garment, just different fabrics that appeared to be hand-sewn. The buckets she is carrying are painted paper glued together, as is the satchel that is held together by a pin. The yoke that holds the buckets is made from silk embroidered thread. She is also wearing a flower headpiece made of silver and pink wire.

The doll stands on a small, rectangular wooden stand that is brown and labeled with the company name as well as the number "2090." The feet are nailed or glued to the stand, and the garment is tacked into the stand.

This object is a 20th century Japanese Shiokumi doll that was made by the Kyoto Doll Exchange. She is a costumed dance doll and is wearing an elaborate red and gold silk kimono with floral designs. She is a shiokumi, or a "salt-scooper," who would carry seawater in a pair of decorated pails on a yoke across her back with the purpose of making salt. Rooted in Japanese folklore, there are two stories in which this doll's design originates. One tale states that the young girl is supposedly the daughter of a lord and carried salt in wartime. The other is from a 14th-century Noh play entitled Matsukaze, which tells the story of two shiokumi sisters who loved the same poet. This doll was popular in Japan in the early-mid 20th century, and many versions were created to be used as both toys and figurines.