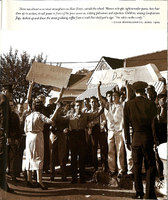 Throughout American history, many different individuals and groups have participated in protest. Each of the artifacts below portrays different times and manifestations of black youth protest.

The video clip of Mighty Times: The Children's March [Figure 1] contains an interview with a 1963 Birmingham Children’s March protester who is now grown. She explains why black children marched, despite the risks to their safety. This Children's March, and the violence the protesters were met with, caught the attention of President JFK and became a catalyst to further the Civil Rights Movement nation-wide.

The cover of Through My Eyes, by Ruby Bridges [Figure 2] shows various protesters standing outside of William Frantz Elementary School in New Orleans, holding signs with statements such as "We Want Segregation" and "We Don’t Want to Integrate." Told from the perspective of a grown woman, Ruby Bridges recounts the protests, refusal to attend, and resegregation demanded by white students and their families. From this image, it is clear to see that protests were occurring from those who were in favor of equality, along with those who were against integration.

In response to the establishment of the Bowling Green State University (BGSU) Black Student Union in 1969, a black student sent a letter to the BG News editor [Figure 3], explaining the aims and purposes of Black Student Unions across the United States. This specific artifact shows how some college students engaged in activism on their campuses. Fighting for equality and inclusion in education were the main aims of the Black Student Union at BGSU.

Finally, in [Figure 4] we see an image of a black quilt from Jackqueline Woodson's children's book Show Way, which was a 2006 Newberry Honor Book. Show Way traces seven generations of black women through histories of slavery, war, freedom, and protest; every generation of women in this family use different means of storytelling (quilts, oral tradition, writing) to show the way to the proceeding generation. The book is deeply personal and unflinching, and it was the final book featured on the celebrated children's television program Reading Rainbow.