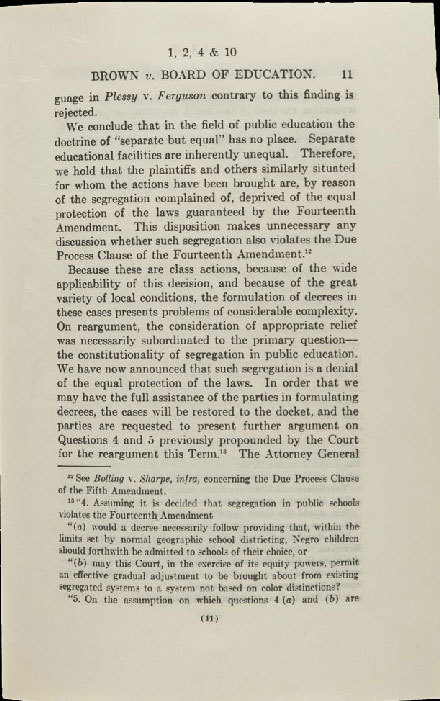 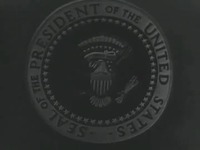 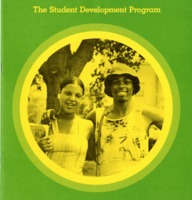 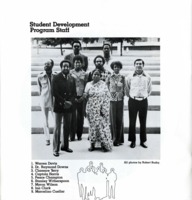 The practice of segregation in public education on the basis of race was ruled unconstitutional in 1954. For many Americans, this ruling marks the beginning of the movement for Civil Rights. Prior to this ruling and for many years after, black Americans—including youth—protested the social, political, and economic conditions that Jim Crow segregation created. Here, documents demonstrate how these calls for equity were met with responses from the federal government, state boards of education, and local schools.

The official court ruling in the case of Brown v. Board of Education (1954) includes the statement, "We conclude that in the field of public education the doctrine of 'separate but equal' has no place. Separate educational facilities are inherently unequal" [Figure 1]. In this ruling, the Supreme Court overturned their 1896 ruling in Plessy v. Ferguson. Due to the 1954 ruling, schools all over the United States were forced to begin desegregating their schools, resulting in riots, school closings, and violence around the country. While the court ruling acknowledged the complexity that comes along with desegregating schools, they urged districts to desegregate in a timely manner. The court did not give a specific deadline, which allowed many districts to hold off on desegregation as long as they possibly could.

In 1957, NBC followed up with 5 plaintiffs involved in Brown v. Board [Figure 2]. When asked how the ruling affected normal life, one student replied that it had not made much of a difference and that “everything seems normal.” They were told that they had to study harder in order to keep up with the white students. Although schools were beginning to desegregate, the racism and other conditions that affected these students on a daily basis had not changed.

In 1962, James Jackson Kilpatrick, the editor of the Richmond News-Leader, published an article titled “The Southern Case for School Segregation.” Within the article, he argues that in the South particularly, schools should remain segregated for many reasons. The foundation of this argument was based upon the notion that for many white Southerners, the races are not equal. Whites were "known" to be superior based on "life experience." Kilpatrick describes segregation as "a fact of life" which demonstrates the majority opinion of many individuals from the Southern United States at this period in time [Figure 3].

While Kilpatrick defended segregation, President John F. Kennedy addressed the need for Civil Rights legislation in areas of employment and education, and called for all United States citizens to reject racism and discrimination out of a "sense of human decency," in the South, as well as in the North [Figure 4]. Throughout the 1960s, efforts to desegregate (and recalcitrant refusals) continued in various forms.

Although much attention has been paid to school desegregation at the K-12 level, universities participated in this effort as well. Funded by a grant from the Ohio State Board of Regents, the Bowling Green State University Student Development Program began in 1969. Their mission was to recruit, retain, and graduate "educationally and economically disadvantaged Ohio students," focusing on non-white students [Figure 5]. Reports released throughout the 1960s demonstrated that, despite the ruling in Brown, schools remained highly segregated. One study in particular showed that students in Cleveland and Detroit--two nearby large cities--were more segregated in 1966 than 1956. The BGSU Student Development Program sent representatives to local high schools to help students through the admission and enrollment process in hopes of promoting greater equity in and access to college. The program grew quickly, from one part-time staff member and 50 participants in 1969 to 9 full time professionals and 950 students by 1972 [Figure 6]. Participants received peer mentoring, tutoring, and career counseling. Stanley Witherspoon, Director of the BGSU Student Development Program, counsels a participant on potential career options [Figure 7].