Protest and Responses in Film, TV, and Music 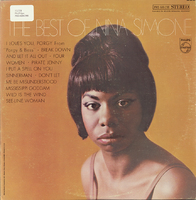 As one of Nina Simone’s most well- known songs of overt protest, "Mississippi Goddam" becomes a musical platform upon which Simone can directly name and describe "the problem" in the United States. As Simone sings, this problem is a complex intersection of issues including unjust incarceration, the slowness of "desegregation," "mass participation," "unification," racial misrepresentation, and the inaccessibility of the promises of American democracy to its black citizens. The song does not dance around these topics but rather directly addresses America’s overt and covert racism as both empirical and experiential fact. Presented here are two different performances of the song. The first, a videorecording, was performed in December 1965 [Figure 1], and the second was a recording for Simone's 1969 concert album The Best of Nina Simone [Figure 2]. Beyond its lyric means of protest, Simone’s performances of the song are openly angry. "Mississippi Goddam" becomes a way for Simone, a black woman, to verbally and emotionally respond to systemic racism and repression in "her country," The United States. Simone's television performance is remarkable for its physical expression of emotion. Simone’s hoarse voice, strident vowels, and angry expression convey her experience of racism in America as personally traumatic but also undeniable. Simone's anger is truthful and unapologetic. The full recording of "Mississippi Goddam" [Figure 2] reveals that the song lyrically presents the ideological dichotomy in America: white hegemony insisting that progress toward equality "go slow" and Black Americans' anger with a supposed "progress" that is in reality, "too slow." While "Mississippi Goddam" represents Black Americans' struggles as racialized "others" in the U.S. it also counters dominant racialized ideas of blackness by presenting Black people as angry, strong, and organized.

The Past Returns in Spike Lee's Bamboozled

Spike Lee's film Bamboozled (2000) critiques how artists and directors intentionally altered the appearance of black bodies to reinforce damaging stereotypes. With its non-linear sense of time, Lee's film shows how the past returns and lives again in contemporary portrayals of blackness. This form of protest asks audiences what we can do take action against unflattering depictions of the black body in modern media.

Lee’s over-the-top satire exposes the distorted conceptions of blackness that American culture created, in order to remind his viewers that these racist stereotypes still exist [Figure 3]. His film is an explicit form of performative resistance that critiques media’s obsession with altering the appearance of black skin. He recreates a modern minstrel show on cable television and explicitly illustrates damaging stereotypes about the black body. Emphasizing how technology has been used to denigrate black bodies, Lee filmed the minstrel show-within-the-film on 16mm film, while the rest of the film is shot on digital video. The characters in the show, Manray and Eat and Sleep, look grainy and unflattering while performing in blackface. Lee’s film thus critiques how artists or directors have intentionally altered the appearance of the black skin to reaffirm and bring back racist stereotypes about the black body.