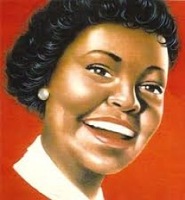 Aunt Jemima pancake mix first debuted in 1893. The character was presented as a traditional mammy figure--the matronly black woman wearing an apron and a bandana, happy to serve her plantation family a breakfast of comfort foods complete with delicious pancakes [Figure 1]. Seventy-five years later, the social pressures from the Civil Rights Movement encouraged Quaker to reimagine the depiction of Aunt Jemima. Throughout the 1960s, Quaker Oats lightened Aunt Jemima’s skin and made her look thinner in print images. In 1968, the company replaced her bandana with a headband, slimmed her down further and created a somewhat younger-looking image [Figure 2]. In 1989, Quaker Oats made the most dramatic alteration yet to Aunt Jemima’s appearance, removing her headband to reveal a head full of graying curls and adding pearl earrings. The company said it was repositioning the brand icon to depict her as a "black working grandmother."  Currently, the updated, more modern version of Aunt Jemima is still featured on the brand’s pancake box [Figure 3]. 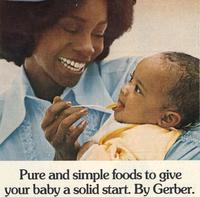 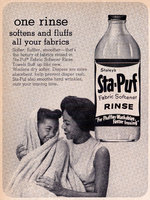 These advertisement photos [Figures 4-9], from various editions of Ebony magazine, depict black women mothering their own children. Many of these women wear wedding rings, offering an implicit rebuke to stereotypes of single-parent black families. For example, in the Gerber advertisement, the mother pictured has a loving smile on her face as she dotes on her baby while feeding him [Figure 5]. In the Sta-Puf fabric softener photo advertisement, the mother cuddles her daughter in a towel softened by the product [Figure 6]. The advertisement for birth control pictures a black family [Figure 9], suggesting a happier life when a couple can plan the size of their family. All of these magazine advertisements present happy, attractive black women as modern mothers. 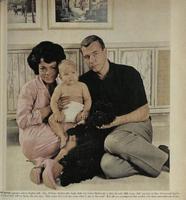 The article "My Baby Travels With Me" by Eartha Kitt [Figure 10], was provocative for its time because it shows Kitt in an interracial marriage. The article appeared in Ebony magazine, which is published by and for the black community. Seeing such a relationship featured on the cover of a magazine in the 1960's was unusual. Kitt is presented in very chic clothing, with her hair smooth and straight. The article, photos, and advertisements present black women in clothing and hairstyles similar to those portrayed in magazines aimed at white audiences. 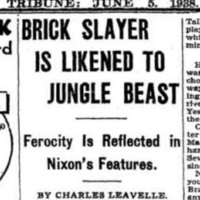 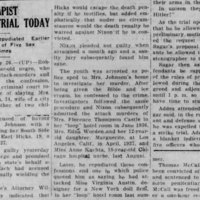 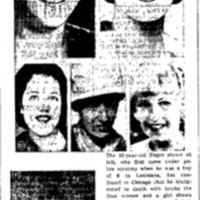 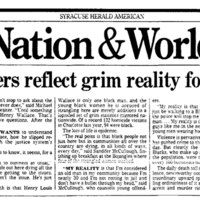 Representations of Black Criminality in Newspapers

The Black Lives Matter movement has bolstered the idea that it is dangerous to be black in America. The deaths of Trayvon Martin, Michael Brown, Eric Garner, and, unfortunately, countless others have proven the truth of this. However, by looking at representations of black criminality in the 1930s, we see how overt and outspoken racism have given way to more covert and institutional forms of racism. In this light, it's hard to see much improvement.

In 1938, Robert Nixon was arrested, tried, and convicted of the murder of at least four white women in Chicago and Los Angeles. Nixon was an 18-year-old black man at the time of his arrest, and the media coverage of his trials was full of dehumanizing racist language. One of the most infamous articles tied to his arrest starts with the headline "Brick Slayer Is Likened To Jungle Beast: Ferocity Is Reflected In Nixon's Features" [Figure 12]. The article goes on to describe a scene where Robert Nixon is in an alley in front of the police and begins swinging on top of fire escapes and scaling buildings in order to show police how he got into one of the apartments of the women he confessed to killing. The author repeatedly emphasizes Nixon's ties to "the old south," such as his lack of "charm of speech or manner that is characteristic of so many southern darkies." The ape-like imagery is continued as Nixon is described with "hunched shoulders and long, sinewy arms that dangle almost to his knees; his outthrust head and catlike tread all suggest the animal. He is very black – almost pure Negro. His physical characteristics suggest an earlier link in the species." The article classifies Nixon as a "Jungle Negro," describing the ferocity of his features. There is little to no factual evidence or discussion of Nixon’s crimes within this article, and whenever information about the crimes is brought up it quickly digresses into more talk of Nixon’s physical features.

Images of Nixon and those he killed were also circulated in newspapers [Figure 13]. This image shows Nixon in a way that you can only just make out some of his features. He is seen with a very grim expression on his face, while in stark contrast to his oversaturated skin are the smiling, perfectly reproduced faces of the white women he killed. This image of him is interesting considering numerous articles stating his incongruous manner in the courtroom, often noting him smiling as the murders were described. These depictions were repeated in numerous papers, with Nixon always shown grimacing, scary, and very black.

Alongside these dehumanizing and incredibly racist accounts of the Robert Nixon case are also allegations and proclamations that Nixon is not only a murderer, but a rapist as seen [Figure 14]. This article has the salacious title "Murder-Rapist on Trial Today," despite the fact that Nixon never actually raped anyone. He confessed to multiple murders (Florence Johnson, Edna Worden and her daughter Marguerite, and Ann Kuchta). The police also quoted Nixon as confessing to the murder of Virginia Austin, who Nixon did not admit to killing, which led to Nixon repudiating all of his previous confessions. There is speculation as to why the rape is mentioned even though never proved, and Richard Wright addresses this question in his novel Native Son, in which his main character, Bigger Thomas, is accused of raping and killing a white woman. Bigger explains that raping a white woman is worse than killing her if you are a Negro. Wright suggests that the rapist tag is thrust onto men like Nixon to rally the community against them.

The crimes of Robert Nixon were a breeding ground for racist comments and animal imagery. Newspaper depictions of black criminality continued in this same vein for awhile. However, by the later half of the century, we can see a significant shift in depictions of black criminals. In 1994, Henry Louis Wallace was arrested for a killing spree in Charlotte, North Carolina. While many articles covering his trial addressed the salacioius facts of his case, at least one article in the Syracuse Herald American took a broader outlook, considering his crimes as an avenue to look at life in America for blacks.

The article [Figure 15] contains quotes from various black members of the Charlotte community who have chosen to speak out about what it means to be black in America. The opening quote is "My reality is that sometimes…the police will stop me because I’m a black man." This is a quote that still resounds in communities of color today. These discussions of life in America are honest and somber; interviewees talk about how black people are not presented in the news walking to Bible study but walking around in "hoods and handcuffs." These portrayals lead to disregard for black-on-black crime and the deaths of black people in communities all across America. The article ends with a quote from Shonda Wallace, who says that she tries to not think about prejudice but finds it hard: "There are certain people who just write us all off, who think 'Well, that’s just their way of life.' You know, a guy had his throat slashed the night before last, right in the center of town. But that’s OK. That’s just a drug thing, Right?" Wallace suggests that black deaths are not taken seriously because black people are not taken seriously. The question is, have things gotten any better?

There is no easy answer. However, it is clear that some things have changed. Racism today is more covert and institutional than in the 1930s. Newspaper depictions of crime now speak more neutrally about the crimes committed. An example of this shift can be found in newspaper coverage of the 2007 arrest of Mark Goudeau, the Baseline Killer, in Arizona. In an article from the Lima News [Figure 16], there are no added embellishments of character or speculations like in the Nixon articles. Moreover, Goudeau’s race is never once mentioned in the entire article. There is a picture of him in the center of it, but his race is never pointed out or used as a tool to incite rage. He is simply a man accused of assaulting and murdering various women; the article never relies on pernicious racial stereotypes or speculation about crimes he was not charged with committing. After consulting numerous articles covering his trial and conviction, I was unable to find a source that used -- or even mentioned -- his race as a tool for expressing his criminality. And that, at least, is progress.

In 1994, America closely followed the highly publicized murder trial of O.J. Simpson, where race was a critical factor. On June 27, 1994, a few weeks after Nicole Brown and Ron Goldman were brutally murdered, two different magazine covers featuring O.J. Simpson were published. The one from Newsweek is a fairly conventional picture of Simpson, but the one from TIME magazine was distinctly different [Figure 16]. Viewers instantly noticed that TIME altered Simpson’s appearance to look more menacing and threatening. The photographer for the TIME cover, Matt Mahurin, argued that race was not on the agenda while composing this cover image. Mahurin claimed that, much like a director such as Sirk or Griffith, he only wanted to lower the lights on a somber scene. Mahurin said that darkening a scene was his long established style to give the image a more dramatic tone. There was a massive public outcry over the two magazine covers because black skin was once again represented as a threat.