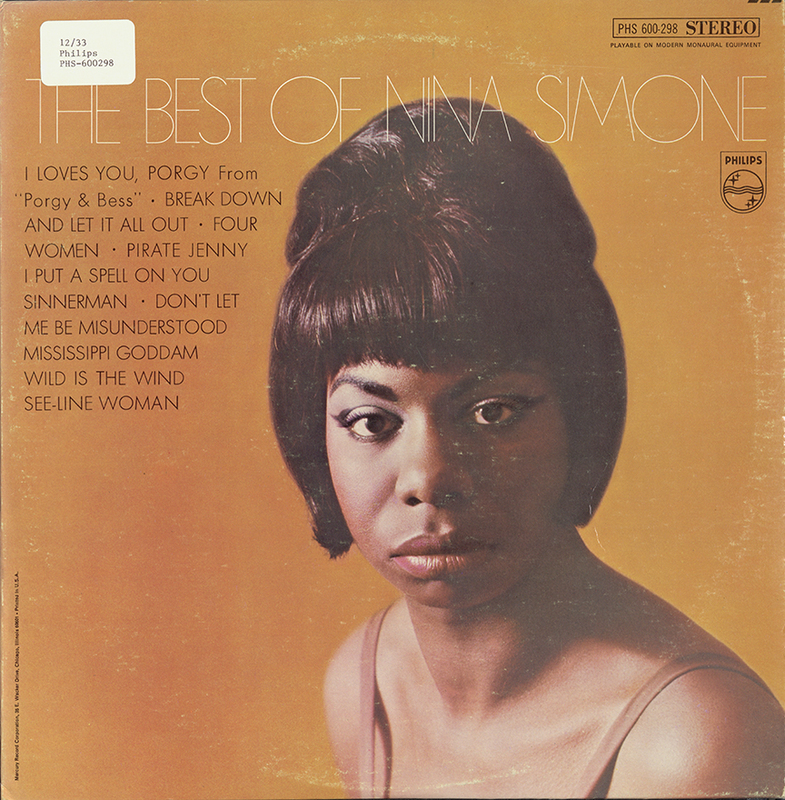 Nina Simone’s performance of "Brown Baby" [Figure 1], her opening number for her December 25, 1965 televised concert in Holland, can be understood simply as a black mother addressing her child. The mother sings about the things she wants her "brown baby" to experience in life including the ability to "speak out loud" and "walk down freedom’s road." However, Simone uses the music, both lyrics and notes, to transform this song into a meditation on blackness that transcends racial ideologies. The brown color of the baby's skin is emphasized not only through the repetition of the word "brown" in the lyrics but through vocal embellishments performed on the "ow" vowel of brown, like melismas (a long run of several different notes on a single syllable) and turns (repetition of three note groupings) on the "ow" of brown and "ay" of the word baby. These ornaments musically emphasize the brown baby's beauty and innocence in the eyes of the mother, but the rest of the song's lyrics allude to the precarity of the baby's future life as a "brown" adult in a racialized world. Rather than perform the piece's climax (the highest note performed on the word "Freedom") as clear and triumphant, Simone knits her brow and garbles "freedom" by closing her mouth and moving her jaw as she sings the word. This performative choice signifies both the pain and the alienation the performer (and the mother) associates with the concept of "Freedom." This performance choice in turn adds visceral and identifiable emotion to the performance for the audience. The mother's desire for a better life for her innocent baby speaks across color lines.

In her song "Four Women" [Figure 2], Nina Simone takes on the personas of four different black women. Simone states that each black woman has a different background, appearance, and set of experiences. The first persona she presents, the persona presented in this video [Figure 2] is "Aunt Sarah." Aunt Sarah, an elderly black woman, has endured "pain inflicted again and again" and while the specific source of Sarah's pain remains unnamed, the immensity of "all this pain" is presumably the effects of racism. Aunt Sarah labels herself as strong despite the physical, emotional, and psychological violence of racism she has experienced. As the song progresses, Simone transforms her physical posture and vocal style to accommodate each woman's personality and experience. In embodying Aunt Sarah, and eventually Saphronia, Sweet Thing, and Peaches, Simone not only validates the reality of each woman’s experience of blackness, trauma, sexuality and racism but also explores the diverse expressions of black womanhood. The act of naming also plays an essential role in the song. The fact that each character says, "They call me" rather than "I call myself" alludes to these identity markers as being both inscribed on the woman but also each woman's ownership (internalization) of that name. Simone uses "Four Women" to complicate the overly simplified (or non-existent) representations of black womanhood in American culture.

"I loves You Porgy" [Figure 3] was a song originally written by the white composer/lyricist duo George and Ira Gershwin for their opera Porgy and Bess, which debuted in 1935. Since its premiere, Porgy and Bess has met with often condemnatory critical responses to its representation of blackness and black culture made especially problematic by the fact that these representations of black Americans were written by two white men. Simone's appropriation of the tune and lyrics transform the song into an authentic performance. While the basic chordal structure of the piece remains the same, Simone adapts her version to fit her own particular style, a unique amalgamation of jazz, folk song, and art song. The song has improvised melodic lines and ornamentation. When coupled with Simone's unique voice, her dark timber, unconventional vowels, and emotional inflection, the music and lyrics express Simone's own subjective emotions and experiences. Thus, message, rhythmic patterns, vocal and instrumental performance sound like new music rather than obvious adaptation. This act of appropriation releases the song from its problematic past and becomes the authentic and personal performance of Nina Simone, a black American performer.