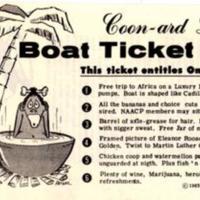 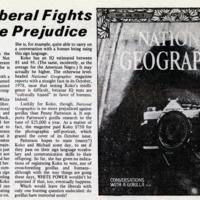 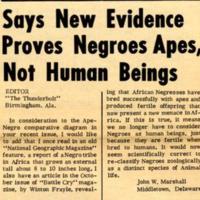 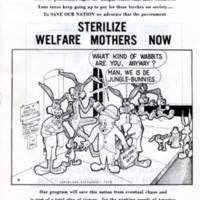 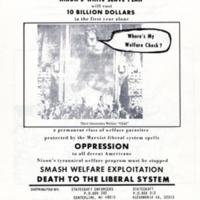 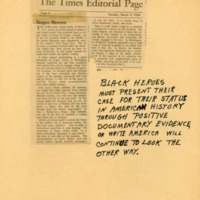 Stereotypes of blackness have not only been used in mainstream media, but have often been used as tools for extremist agendas as well. For instance, George Lincoln Rockwell, who founded the American Nazi Party in 1959, used his own alternative press, Lincoln Rockwell, to print out items that mocked black people and undermined black protest. In Figure 1, we see an example of this in the form of a fake boat ticket through "Coon-ard Lines" that entitled the bearer to a free trip to Africa on a boat "shaped like a Cadillac with fins." The menu featured "all the bananas and choice cuts of missionary desired. . . chicken coop and watermelon patch on deck . . . plenty of wine, marijuana, heroin and other refreshments." One could "twist to Martin Luther Coon's jazz band." Rockwell handed out these fake tickets during his "hate ride," a response to the Freedom Rides of 1961. This fake ticket was also a mailer used to garner funds for the American Nazi Party. In a 1966  interview with Playboy Magazine, Rockwell states that "One of the biggest things we've already done to propagandize ourselves is our 'Coon-ard Lines Boat Tickets to Africa.' It's our most popular mail-order item; white high school students order them by the thousands" [Figure 1].

White nationalist alternative presses frequently stoked racist hate by comparing black people to animals. A 1978 article in White Power, a neo-Nazi publication which acted as the mouthpiece of Rockwell's National Socialist White People's Party and circulated throughout the 1960s and 1970s tells of scientist Francine "Penny" Patterson, a "woman of high racial caliber," who refused to give up Koko, a gorilla she had taught 375 signs in sign language [Figure 2]. The article offensively compares Koko’s estimated IQ—an early twentieth century invention frequently used to attempt to determine intelligence based on race—to equal that of the average "American Negro." The author further suggests that interracial relationships are equivalent to the union between a gorilla and a human.

In a similar vein, a 1968 letter to the editor in The Thunderbolt, a newspaper founded by white nationalist Edward Reed Fields in the late 1950s [Figure 3] argues that black men and women can breed with other great apes. The author assumes as evidence an article from Battle Cry Magazine, which recounts purported (but untrue) incidents where black women bred "successfully with apes and produced fertile offspring that now present a new menace in Africa." The letter writer suggests the magazine’s "findings" illustrate that Africans are not humans, but belong to a different species. Arguments like these run rampant in white nationalist, white supremacist, and neo-Nazi literature, which take beliefs about black inferiority as evidence of that inferiority.

Figures 4 and 5 are from leaflets circulated in 1970 by an Alexandria, VA publication named Statecraft, a pro-George Wallace publication that billed itself as a "journal of political education." The cartoon uses racist caricatures to stoke economic anxieties. The illustration on the front of this 1970 leaflet depicts an Elmer Fudd-like character wearing a bowler hat and suit and carrying a suitcase reading "Welfare Dept." He asks a few bunnies (all modeled after Fudd’s nemesis, Bugs Bunny) "what kind of wabbits are you, anyway?" Leaning against the wall of an apartment complex and next to a mailbox whose only purpose is to receive welfare checks, the rabbits respond "man, we is de jungle-bunnies." One of the rabbits against the wall cradles a child in her arms while the male rabbit next to her drinks "Carrot Wine." Behind Elmer Fudd a female rabbit with a pregnant belly ignores her children running around, and another of her children pees on a fire hydrant. Above the cartoon a bold headline exhorts, "sterilize welfare mothers now." On the back of the leaflet a washed-out gray-scale cinema shows a skyscraper-tall King Kong staring menacingly at fleeing bystanders below, asking "where’s my welfare check?" The image caption reads "Nixon’s white slave plan will cost 10 billion dollars in the first year alone."

Scrapbooks as Alternative to Mainstream Press

White supremecist publications were not the only alternative to mainstream media. Personal scrapbooks have long been used by underrepresented people to document their own lives and of those of their communities. Frederick Douglass encouraged newspaper readers to clip out stories to preserve stories about black heroes. Scrapbookers used clippings from the mainstream press, but they changed their meaning by arranging the fragments in different ways and by commenting on them. Such choices gave black activists a way to speak back to mainstream represenations of black protest. Scrapbooks were also a way to record stories of black role models, which was part of the racial uplift movement. Ella P. Stewart’s scrapbooks show her historical approach to documenting her life. Stewart, one of the first black female pharmacists in the U.S., donated her scrapbooks to BGSU's Center for Archival Collections in 1982. Historically, minority groups are underrepresented in archives, but by contributing her scrapbooks Ella P. Stewart added to the diversity of the repository. By choosing to add her scrapbooks to an educational institution, she showed how much she valued her work, and she also actively changed the way black activists are represented in the archives.

In the scrapbook page shown here [Figure 6], Ella P. Stewart reacts to a newspaper editorial about the lack of black heroes. The article points out that many black American heroes have been forgotten by history, and that some activists are working to change this lack of representation. Ella P. Stewart comments that black heroes must present themselves through "positive documentary evidence." This page shows how mainstream media has neglected or misrepresented black heroes and how Stewart believes her scrapbooks will serve the community. By documenting her life and the work of the National Association of Colored Women (NACW), Stewart created a space where black heroes are represented.