About Whiteness: Identity in Performance 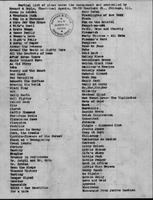 The turn of the century brought swift changes to the world of American theatre. In addition to its status as a medium of artistic expression, American theatre was (and still is) a means of generating capital. This means that theatre-makers and audiences share a producer/consumer dynamic. In addition to presenting faithful reproductions of Shakespeare and Sophocles to upper-class audiences, theatrical touring companies increasingly offered popular entertainments for working-class white audiences. Foremost among these companies was John A. Himmelein's The Ideals, a group of performers who toured the Northeast United States between 1870 and the early 1900s.

An examination of the tickets, programmes, and media generated by Himmelein's company clearly illustrates the various ways in which The Ideals both shaped and reflected Anglo-American identity. Most noticeable in these pieces is a distinct "othering" at play. The members of Himmelein's company were themselves white Americans, performing plays written by white Americans, exclusively for audiences made up of white Americans. Thus, the work generated presents an assumed Anglo-American audience to the exclusion of other racial experiences. As this system of narrative-making privileged the white experience, racial minorities were implicitly defined through their frequent absence, both on stage and in the audience. When non-white identities were represented on stage, they always appeared as caricatures viewed through a strict white worldview, as can be seen in the Faurot Opera House Programme advertisement (Fig. 3).

While the Anglo-American audiences that The Ideals played to were homogenous in their racial identity, the work of the group also points to an internal structuring of white identity that relied heavily on strict gender roles. This is reflected both in the advertising tactics taken by the company's manager, Howard Wood, and evidenced by the plays performed. Note the admission tickets distributed by the company (Fig. 4). In addition to the distinguished, masculine image of John Himmelein, the ticket advertises complementary seating for ladies. Hoping that working-class wives would bring their husbands to the theatre, this offer designates women as initiators of cultural events while playing into modern notions of high-class art. The etching made of a scene from Better Than Gold reaffirms these dynamics (Fig. 1). Men physically dominate the image, clearly involved in physical confrontation, while the woman in the image swoons on the floor, her feminine sensibilities overcome by overt displays of masculinity.

Perhaps the most telling evidence of The Ideals' contribution to constructions of Anglo-American identity lies in their popular success. Audiences continued to pay to see performances for decades. Clearly, the work produced by Himmelein's company supplied white audiences with an image of whiteness that met their demands. Be it through the exclusion of other races or inclusion of traditional gender roles, The Ideals presented work to which audiences responded enthusiastically. Reacting to the increasing diversity of American society, The Ideal's universalizing assumptions of its audiences provided a stark--and perhaps comforting--contrast to the multifaceted narratives emerging outside of the theatre's walls. To some extent, their popularity suggests that audiences identified with this white universal. Given the company's name, it is no surprise that the commodity many audience members were seeking was not inherently theatrical in nature, but rather a broader racial experience--an American ideal.