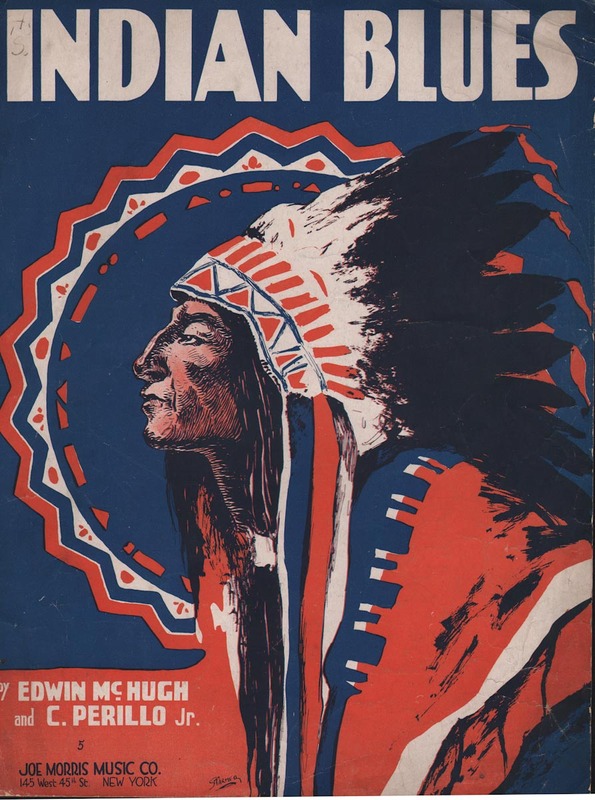 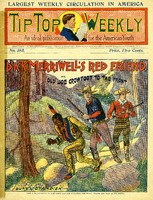 Fig. 4. Dick Merriwell in the Wilds 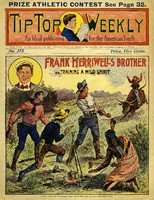 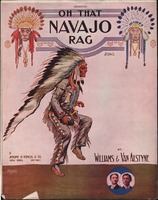 While Native American men were often depicted as having an inherent violent nature, a long history of white colonization, even genocide, of American Indians had led to a parallel view of Natives as largely conquered and subdued. The popular image of the Native American warrior was replaced with the stereotype of the “civilized” or “noble savage” doomed to extinction. Notice that “savagery” is still very present in the popular imagination. Though Native American violence increasingly came to be seen as historical, it does not disappear from white representations of Native Americans.

Alongside official attempt to assimilate Native Americans through programs such as missionary schools and government benefits, popular music, art, and literature continued to stoke fears of the savage Indian. Such texts emphasized the idea that the Native man could at any minute revert to his primitive nature and return to violence.

The song “Oh That Navajo Rag” (Fig. 7) tells the story of a Native American tribe celebrating the return of an Indian chief from college. His return marked the disappearance of the violent savage replaced by the civilized Native American who accepts the white man’s knowledge. The song uses violent imagery to remind audiences that though this Indian chief is now deemed civilized by white audiences, his link to violence, barbarism, and savagery can never be completely broken.

Although popular images of Native American men never truly distanced them from savagery, frontier stories and songs frequently feature them in more civilized roles, as a friend or guide to the white hero. The figure of the civilized savage reminds audiences that Native Americans are still inferior to white men. Rather than having agency on his own land, the Native is forced onto reservations and then expected to aid the white men in power.

Such “civilized” representations of Native American men reveal racial hierarchies at play. For instance, notice that in a number of the images, the white men are positioned above, surrounding a single Native American man. The Native man may be kneeling at a fire, suggesting he is performing the domesticated, “feminine” role of cook. Additionally, there are illustrations in which the white male faces are clearly seen but the Indian’s face may be downcast or hidden altogether. All of these things emphasize the Native American's status as secondary to the white cowboy.