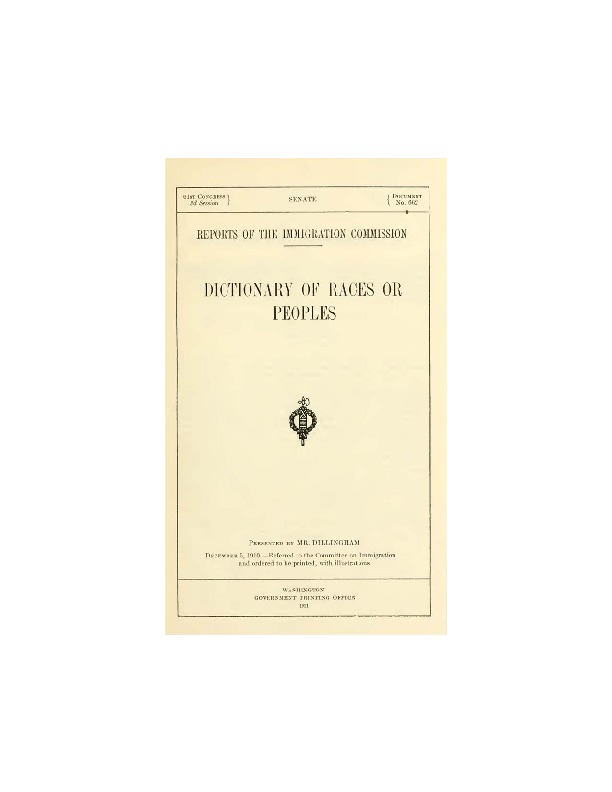 Dictionary of Races or Peoples

The United States Immigration Commission composed this document in 1911, in the hopes of initiating immigration reform. This commission consisted primarily of whites, with the goal of "studying" all ethnic groups and immigrants in the United States in the early 1900's.

While the stated goals of the commission appear to be race-neutral, racist attitudes shaped their vision for how to "improve" the United States intellectually and to prevent the rise of "undesirable" qualities in its citizens. Contrary to the claims of objectivity with which each race is defined, the subjectivity of the commission regarding various ethnicities and races is noteworthy.

Below, you can see how races were evaluated in terms of white perceptions of "scientific advancement." The excerpt below indicates that intelligence was measured by how well or quickly immigrants were able to assimilate and acquire the English language, rather than by considering features of culture, such as the ability to communicate or contribute to the nation in other ways.

"The family of inflected languages spoken by all the races or peoples of western Europe... Four fifths of our immigrants are of Aryan stock and their racial relationships to each other are determined by their languages... It must be admitted that there is greater diversity between eastern and western Aryans than there is, for instance, between the Aryan Greeks on the one hand and the Semitic Jews... As different as the latter are in language from ourselves, they share more fully our modern science, literature, and civilization and they acquire more readily our tongue than does the Aryan Hindu or Perisan. Physically, also, they have become more like ourselves than are the darker and Asiaticized Hindus" (emphasis added).

You can see the same sorts of concepts below with regard to blackness, in which various groups are collected together and implicitly compared to animals (see mention of "woolly" hair). Rather than acknowledging individuality and variability, the U.S. immigration commission instead considered all black people to "belong to the lowest division of mankind."

"That grand division of man-distinguished by its black color and, generally speaking, by its woolly hair. While the black, like the white and yellow races, is accepted by practically all ethnologists as a primary division of mankind, there is the greatest difference of opinion as to what should be included in it... [However,] they are alike in inhabiting hot countries and in belonging to the lowest division of mankind from an evolutionary standpoint.”

"That great division of mankind which is native to America. To avoid confusion arising from the popular use of the word 'America' to indicate the imported Caucasian stock, Brinton calls the natives 'Amerinds,' a contraction of the term 'American Indians.' This race includes all the aborigines of North, Central, and South America, with the possible exception of the Eskimos. Although an interesting subject to American ethnologists, but little space can be given it in a discussion of immigration; for, as will presently be seen, it cuts no figure in immigration statistics...

The entire race, excepting the Eskimos, is remarkably homogeneous from a physical point of view. It is unnecessary here to discuss linguistic classifications...

The American is the smallest grand division of mankind... Therefore not 100 Indians a year are enrolled amongst our immigrants--probably less than the number that remove annually from the United States. The American race, therefore, like the Malay race, is of no practical importance to this study. Even the small Negro immigration of 5000 per year, standing thirtieth in number down the list, has far more significance."

Below, you can see the racial biases shaping the commission's description of physical features of Asian Americans.

"To physical characteristics, but little need be said. The Chinese type is well known. Close observation will show that the peculiarity of the 'Mongolian eye' does not consist in its being set obliquely, but in having a fold of the upper lid at the inner angle of the eye, which covers the caruncle. The latter is exposed in the Caucasian eye and generally amongst the modified Mongolians of Euriope... Finally, the short, or brachycephalic, type of head is more characteristic of the Mongolian and Malay races than of any other. The eastern Eskimos, however, like most American Indians and Negroes, have long heads. The short-headed type of Europeans found in central Europe is traced by some to Asiatic origin. If this view be correct, the type goes back to prehistoric times. It may be safely said that no considerable invasion of the Mongolian race into Europe can be proven."

As you can see, there was little room for self-representation of race and cultural differences, as the Commission was composed of whites who took an observational, rather than immersive, role in examining and defining race. However, although many of these racial groups were unable to represent themselves in government documents, many, such as African Americans, sought self-representation in culture, such as music performance, literature, and newspapers. Native Americans, although "of little significance" to the Immigration Commission, were able to retain their cultural distinctiveness through controlling information given to those outside of their communities. For instance, when asked to share oral histories with anthropologists, some Native Americans made up stories or altered them in order to preserve their folklore, due to their distrust of whites.