The Asian as "Unassimilable"

The Asian as "Unassimilable"

Before anxieties about Asian immigrants and Asian Americans condensed into a fear of the “Yellow Peril,” mainstream, (at the time, mostly white) Americans saw Asian Americans as a group that could not identify with or become a part of American culture and society. The idea that Asian Americans were unable, or even unwilling, to assimilate continued throughout the late nineteenth and early twentieth centuries, a time when Asian immigrants were still not legally permitted to become naturalized U.S. citizens. Even when Asian Americans made efforts to adopt Western practices, whites frequently viewed such behavior as insincere.

Depictions of Asian Americans with the intent to portray them in a negative light were not only exaggeratedly racialized, but also placed emphasis on cultural and linguistic differences. Traditional Eastern clothing, the sounds of Asian languages and music, dietary preferences, and especially the queue hairstyle of Chinese men were emphasized and held up for ridicule. This occurred not only because these characteristics showed a stark difference from Euro-American norms and provided a simple way to visually signify difference between Asian Americans and whites, but also because they appeared to be signs of deviation from Western gender roles. In particular, Asian men were viewed as feminine, childlike, or asexual, both because of their manner of dress (robes and long, braided hair) and their willingness to work in positions that were considered either women’s work (in the laundry business or in restaurants) or unfitting for an adult man (for example, as house servants).

Accordingly, the unassimilable Asian American was also used for protagonists or comedic characters. These "positive" portrayals emphasized qualities that were perceived as non-threatening, such as “backwardness,” incompetence, or blithe ignorance (signaled by pidgin English). These attributes typically were given to comedic characters serving as foils for white protagonists, who seemed more intelligent and capable by contrast.

Negative stereotypes of Asian Americans and doubts about their ability to assimilate were openly expressed in the media, such as the magazine article (Fig. 1) that sarcastically questions whether the conversion of certain Chinese Americans to Christianity is indeed genuine.

A more "neutral" comedic character is the Chinese man in the laundry advertisement (Fig. 2), in which he speaks pidgin English while using an outdated method of starching clothing, while the white woman in the second panel praises a modern laundry product.

"Positive" images of Asian Americans include those of Charlie Chan (Fig. 3), the protagonist of Earl Derr Biggers's series of detective novels, and Japanese Joe (Fig. 4), a detective character from a nickel weekly. Both of these characters are shown wearing Western-style clothing, and in comparison to the other images, the visual representation of their Asian features is exaggerated to a lesser degree (Japanese Joe) or not at all (Charlie Chan). 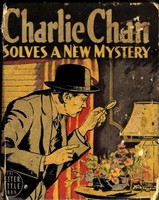