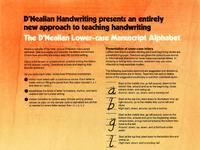 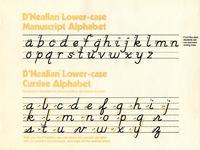 As typing continued to persist and cursive was used less frequently, the Zaner-Bloser method became more toilsome for students. By 1976, Donald Thurber introduced the D’Nealian Method based in part on Palmer’s methods, except that it further simplified cursive production and also allowed for penmanship in print form. The print form still has tell-tale signs of its cursive cousin with its distinctive curvy “monkey tails.” Although this gives the print form a unique look, the design may have possibly served as an easier way for novice D'Nealian writers to transition from print to cursive. The D’Naelian Method represents the transformations and shifts, many times recursive in nature, that shored up much of how penmanship was taught in early 19th to 20th century.

The penmanship manuals represent both the influences of developing writing technologies and also the way the manuals themselves influenced the use of these such technologies. Moreover, they hold a place in history, a snapshot of little, one room schools houses that speak through time in  offering clues about what the future may hold for penmanship in its various analog and digital forms.

Jake Weidmann delivers a captivating talk on traditional forms of penmanship and its value in the 21st century.