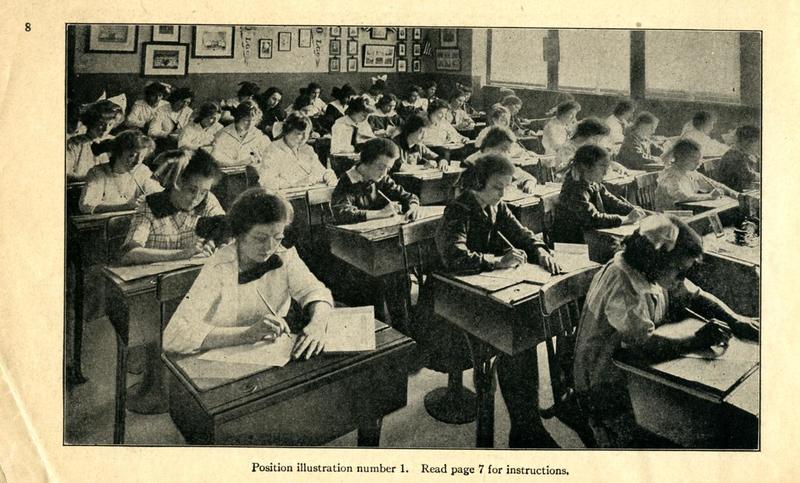 William A. Alcott stated in Slate and Black Board Exercises that "no common school can thrive well, and the moral and physical character of the pupils be properly attended to, without furnishing the children with ample enjoyment; and I repeat it, I know of no way of employing them so well as by means of slates and pencils" (11-12).  It was these slates and pencils along with the classrooms they occupied that helped to change writing instruction into what we know in modern society.  In examining these different technologies, instructors and students alike can not only see how far our classrooms have come, but also how similar the modern classroom is to the classrooms of the past.

Not only did these technologies change writing, but writing worked to change these technologies.  Wright and Halloran in "From Rhetoric to Composition: The Teaching of Writing in American to 1900" argue that the nineteenth century was a place of revolution in writing technology. The layout of the spaces and the surfaces used would transform writing instruction. Instruction was made visiable to all the students as lessons were placed on the black board and copied onto slates. These same spaces and surfaces were remediated to accomodate the teaching methods of the time. Walls were used to display work and materials for a lesson and different slates were created to accomodate the varying levels of students and their activities. Improvements in pens, ink, and pencils made it less difficult to write. Paper and book production increased and made these materials more readily available to everyone.

These technologies also impacted the writing process. Wright and Halloran further explain how originally the kinds of technologies and expense of materials meant invention had to occur all in one's mind. Then a person would write it down, hopefully perfectly the first time. With the improvement in writing technologies during the 19th century though the modern concept of writing and revising multiple drafts would be developed as a possibility.

It's from these technologies (spaces, surfaces, utensils, and manuals) that the "school experience" and the beginnings of writing as we know it was born.