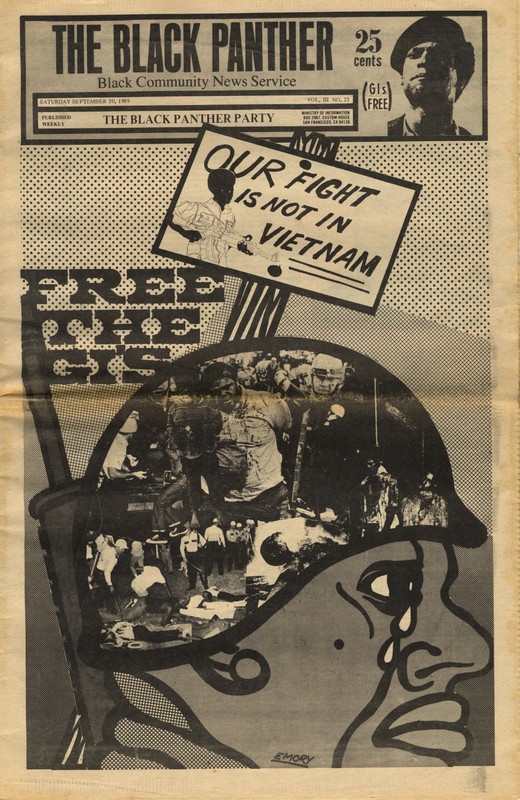 The 1960s is well-known as a period in which many groups made significant progress towards guaranteeing their Civil Rights. While discussion of the Civil Rights Movement frequently focuses almost exclusively on nonviolent activism, such as protests led by Martin Luther King, Jr., there were a variety of activist tactics and strategies. The Black Panther Party, often portrayed as militant or caricatured as thuggish [Figure 2, Figure 5, Figure 7, Figure 9], worked to achieve equality in a number of ways [Figure 1, Figure 3]. While the Black Panthers advocated for the use of weapons, usually guns, this militancy was primarily oriented toward self-defense, as police brutality toward African Americans was rampant at the time. African Americans were threatened with violence not only from the police, but also from white supremacists. The image from “White Power” [Figure 4] is a stark reminder of racism toward African Americans. While it can be argued that white supremacists were a fringe group, their attitudes were rather common.

Consequently, the Black Panther Party approached the fight for equal rights with a revolutionary attitude. Although their platform included armed self-defense, it also included many nonviolent community-building programs, such as the “Free Breakfast for Children” program [Figure 3]. Also, the Black Panthers published a newspaper [Figure 1] that highlighted issues facing the African American community, such as poverty, police brutality, and racism. In the cover image above from The Black Panther, two topics are addressed. One is the war in Vietnam: African Americans were sent in disproportionately large numbers to the front lines, and so were more likely to die in the war than white Americans. The second issue addressed is police brutality, which is pictured inside the helmet of the African American G.I. Here, it is easy to see the complex types of activism present in the Black Panther Party: the militancy of the “war” rhetoric is evident, but so is social advocacy, in raising these issues with readers.

White supremacists also used alternative presses to push their agenda. White Power groups used political cartoons and inflammatory rhetoric to promote racism [Figure 2, Figure 6, Figure 8]. While there are some formal similarities between White Power and Black Power publications, it is important to note that the Black Panther Party took the rhetoric of White Power and reappropriated it for more progressive ends, often mocking the racist attitudes of white supremacist groups. Our goal in placing these images together is to highlight the ways in which the Black Panthers worked to combat and mock existing racist attitudes in order to achieve social change.