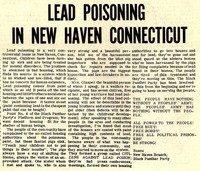 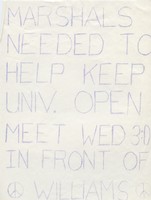 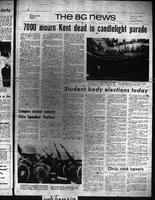 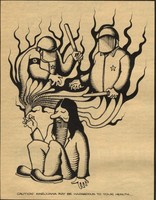 The Black Panther Party, while commonly portrayed as the militant side of the Civil Rights movement, participated in numerous nonviolent activities designed to help African Americans achieve equality. These included a “free breakfast for children program” to help combat poverty in African American neighborhoods, as well as foster a sense of community [Figure 1]; community-building events such as the Free Huey barbeque [Figure 8]; and the National Conference for the United Front Against Fascism, which brought activists together to peacefully advocate for political change. The Party published a newspaper, The Black Panther [Figure 3], which featured poetry as well as essays on racism and other issues facing the African American community. Figure 2 shows the Party raising awareness for lead poisoning in the community and highlights the racism that put African American children at risk. Other political cartoons [Figure 3] raised awareness for both the war in Vietnam, in which African American soldiers were disproportionately sent to the front lines, as well as racially motivated police brutality in the United States. These images together give a sense of the range of the Black Panther Party’s nonviolent activism.

Figures 6 and 7 reveal the non-violent activism taken by John Sinclair and the Rainbow People's Party in Detroit, Michigan. Figure 6, "The Ten Year Sentence of John Sinclair," was a brochure circulated to disseminate knowledge about Sinclair's political imprisonment; it culminated in the "John Sinclair Freedom Rally," a protest and concert for which John Lennon wrote the song "John Sinclair." Figure 7 is the cover to John Sinclair's "Marijuana Revolution," a pamphlet published by the Rainbow People's Party that discussed the radical political potential of smoking marijuana. Here, Sinclair argued that the enforcement of anti-marijuana laws by police and the judiciary had the effect of politicizing and radicalizing countercultural movements and nonviolent activism.