The War in Vietnam and Military Violence 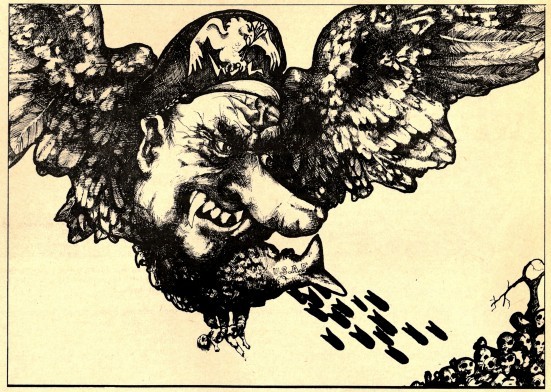 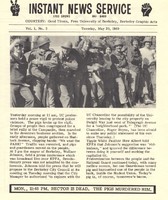 When Richard Nixon was elected as president in 1968, the war in Vietnam had been raging for over a decade. Nixon campaigned heavily on the promise to begin withdrawing troops from Vietnam and the surrounding countries. By the early '70s, however, President Nixon had not only failed to remove troops from Vietnam, but also publicly acknowledged the expansion of the war into Cambodia. Anti-Vietnam sentiment became closely linked to anti-Nixon sentiment, depicted here in political cartoons portraying Nixon as directly responsible for the war [Figure 1, Figure 2, Figure 3].

On April 30th, 1970, when President Nixon announced a series of military campaigns throughout Eastern Cambodia, students began protesting ROTC programs on college and university campuses all over the country. Student protests at Kent State University, which lasted four days, were met with violent suppression by the Ohio National Guard, resulting in the deaths of four protesters and the burning of the ROTC building on campus. In the following days, students at BGSU expressed both support for ROTC on campus [Figure 4] as well as disapproval for the program [Figure 5].*

However, military violence was not limited to anti-war protests. While the Kent State shootings are the most infamous example of military violence on the home front, the National Guard was regularly deployed to curtail activist protests of all sorts. This can be seen in the Instant News Service briefings from the People's Park movement in Berkeley, California [Figure 6], in which Governor Ronald Reagan deployed the California National Guard to help maintain control over Berkeley's campus and to suppress student and community activism. In many cases, the conflict between the Armed Forces and activists ended in violence.

* Many civil rights groups were also deeply committed to the anti-war movement. For more information on the involvement of African Americans in Vietnam War protests, particularly the reactions of the Black Panthers to the war and to police violence, see the "Racial Nationalisms" and "Nonviolent Activism" pages.