Handbooks relating to metaphysics and pseudoscience gained prominence in the 19th and 20th centuries, due to the rise in popularity of collectives and new schools of philosophy, such as the New Thought movement. These philosophies covered areas regarding Laws of Attraction (the idea that positive or negative thoughts can effect the physical world), psychic energy, and healing the physical body through the mind. Many of these titles remain in print today, well over 100 years since first been printed. An early leader in New Thought was William Walker Atkinson (1862–1932) who was the editor of New Thought magazine, and wrote over 100 books on religious, spiritual, and occult topics including Thought Vibration or the Law of Attraction in the Thought World, first published in 1906.

Another author of the New Thought movement was Walter Winston Kenilworth, whose books Psychic Control Through Self-Knowledge (1910) and Thoughts on Things Psychic (1911) are still in print today. 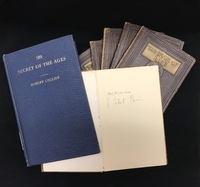 Included in the collection are several books by New Thought writer Robert Collier (1885-1950), including a signed seven volume 1925 original edition titled The Book of Life, and the more popular updated edition titled The Secret of the Ages. The Secret of the Ages sold more than 300,000 copies in his lifetime and is still in print. This metaphysical self-help book seeks to unlock the unlimited power of the human subconscious in order to actualize happiness, fame, and fortune.