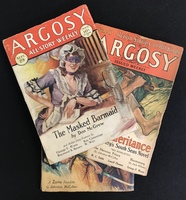 In under a decade since Baroness Orczy created the secret-identity vigilante trope the "pulps" were filled with masked heroes and outlandish criminal masterminds.

Pulps, or Pulp magazines, inexpensive fiction magazines that were popular from the late 1800s to the late 1950s and printed on cheap wood pulp paper, "dominated American mass media entertainment" says Dr. Hoppenstand, and often had sensational stories of action heroes and covered many genres including adventure, horror, detective & mystery, aviation, railroad, westerns, and science fiction. The Hoppenstand collection has over 1,000 pulp magazines in all genres ranging from the 1910s through the 1950s. 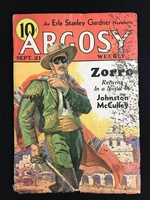 Many such popular characters were created by Johnston McCulley (1883-1958), including his most enduring character Zorro. Remarkably similar to Orczy's Scarlet Pimpernel, McCulley's character was also a highly skilled swordsman and acrobat under the disguise of a seemingly cowardly and foppish young man named Don Diego Vega, only son of the richest landowner in California.

McCulley wrote over 60 Zorro stories over a 40 year span, all of which are represented in the Hoppenstand collection, either by 1st edition pulp magazines, reprint novels, or bound collections. 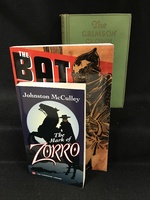 Other popular characters created by Johnston McCulley include the Crimson Clown and the Bat.

First introduced in 1926, the masked vigilante (another wealthy bachelor, this time in a clown suit) that used gas guns and syringes filled with knock-out drugs to subdue his enemies, the Crimson Clown was so popular that, as soon as there was enough text, a hardback collection was published in 1927 (pictured). A second collection was published in 1928.

While the Bat, a back from the dead to exact vengeance character (also with a gas gun), garnered only four short stories (appearing in Popular Detective magazine from 1934 to 1935), the character is said to be the inspiration for Batman admits the creator and editor of Popular Detective, Jack Schiff, was also the editor for Batman from the 1940s through the mid 1960s. 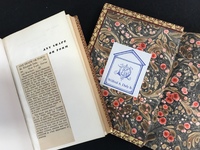 In 2016 Gary Hoppenstand donated a collection of mysteries from Elizabeth Daly, one of the most popular crime writers of the 1940s, including a very rare set of leather-bound editions from her own family, some of which are accompanied with clippings of newspaper reviews of the books. Also included in that donation was a collection by the horror fiction author Shirley Jackson, best known for her novel “The Haunting of Hill House” (1959) and short story “The Lottery” (1948). Of this particular donation Hoppenstand said “Bowling Green has won the prestigious Raven Award from the Mystery Writers of America for its crime and detective fiction collection, so it’s the best place in the world to donate that kind of material, and also because of my special relationship with the University."