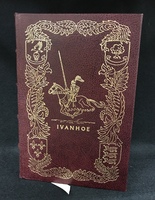 Historical Adventure Fiction has been a popular genre for over 200 years. Dr. Hoppenstand identifies historical adventure fiction as the action in the novel "must occur outside of a fifty‐year time span of the author's life to be considered historical.” The genre of Historical Adventure can be traced back to the novels of Sir Walter Scott, such as Ivanhoe (1819). 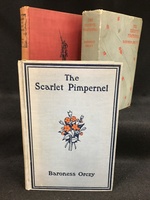 Baroness Orczy was a Hungarian-born British novelist and daughter of Baron Félix Orczy. A prolific writer, we have over 50 items in the Orczy collection including the Scarlet Pimpernel series (first published in 1905). The foppish aristocrat by day, formidable swordsman by night title character is known as the first instance of a hero with a secret identity, a troupe that continues in popular culture today, including such time honored characters as Batman, Daredevil, and the Shadow. 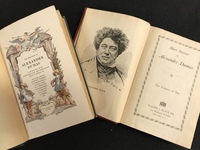 One of the most enduring writers of High Adventure, and one of the most celebrated French authors of all time is Alexandre Dumas. Born Dumas Davy de la Pailleterie, as an adult he changed his name to Alexandre Dumas, using the surname of his paternal grandmother, an enslaved woman of Afro-Caribbean ancestry. His father, Thomas-Alexandre Dumas, had been born in the French colony of Saint-Domingue and was brought to France as a child and became one of the highest-ranking men of African descent ever to lead a European army. Among Alexandre Dumas’ most well known  works is the Count of Monte Cristo and the Three Musketeers.

A popular subgenre of Historical Adventure Fiction that is represented in the Hoppenstand Collection is Roman military fiction. Items include Ben Kane's The Forgotten Legion Trilogy, Anthony Riches' Empire Series, and Simon Scarrow's Eagles of the Empire series.