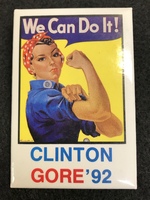 During World War II, when women joined the manual labor workforce en masse, an allegory arose of the patriotic hard working female factory worker named Rosie the Riveter and the icon was embedded in songs, print, and film. The iconic painting by J. Howard Miller was used heavily in campaign pins through the 1992 and 1996 Bill Clinton campaigns and again with Al Gore in 2000 and Hillary Clinton's presidential campaigns in 2008 and 2016. J. Howard Miller's 'We Can Do It' poster image was produced in 1942 and displayed in Westinghouse production locations in February of 1943, and only became widely associated with the Rosie the Riveter allegory decades later.

Opposite to some of the Republican party pins in our collection that paint Bill Clinton as a womanizer, this 1992 Clinton/Gore pin displays the slogan "We Can Do it!" asking America's female voting population for support. 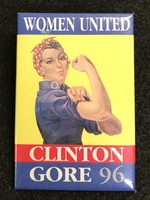 This 1996 Clinton/Gore pin is nearly identical to the 1992 pin but replaces the slogan "We Can Do it!" with "WOMEN UNITED." 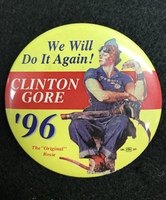 Norman Rockwell's May, 29th, 1943 cover of the Saturday Evening Post of Rosie the Riveter is used here in the 1996 Clinton/Gore pin again appealing to women by assigning the 1992 victory to the female voter. 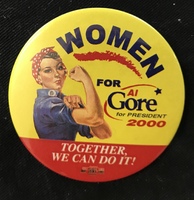 This button for Al Gore's 2000 presidential campaign reprises the J. Howard Miller 'We Can Do It' image with the variant slogan "TOGETHER, WE CAN DO IT!" 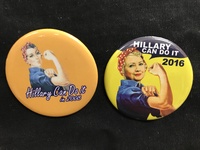 The iconic Miller image was used heavily in Hillary Clinton's 2008 and 2016 presidential campaigns as was the emphasis of mobilizing the female vote. This 2008 pin uses Miller's image with the augmented "Hillary Can Do It in 2008" slogan and going a step further in 2016 with replacing the face of Miller's painting with that of Hillary Clinton.