Appeals to the Female Voter 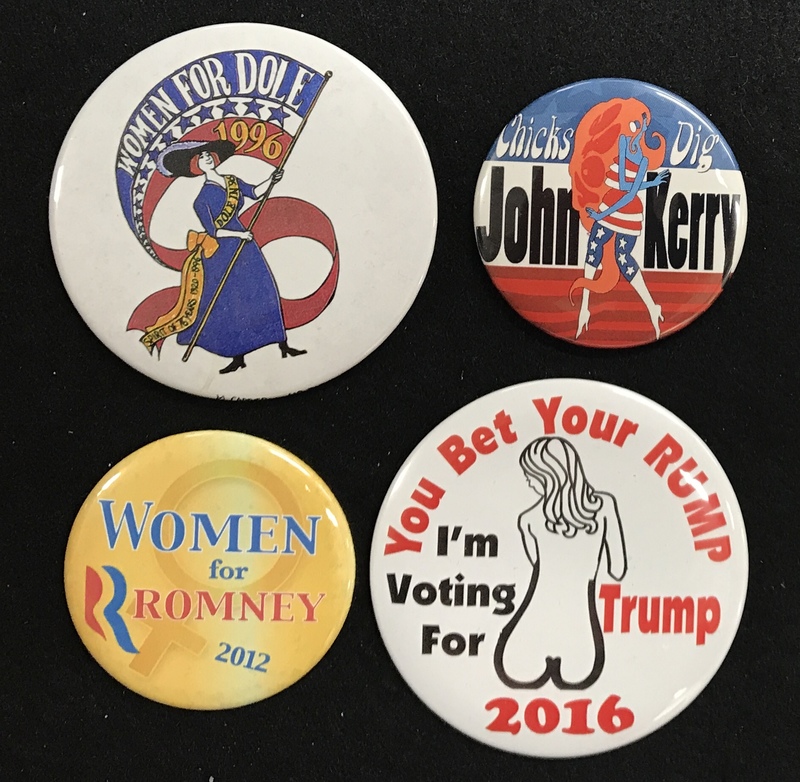 The appeal to the female voter takes on many forms in our collection including straight forward slogans such as this "Women for Romney" button from 2012 (bottom left), to more playful appeals such as this "Chicks dig John Kerry" button from 2004 (top right), buttons embedded with images of women such as this "You Bet Your Rump I'm Voting for Trump” button from 2016 (bottom right), and buttons appealing to patriotic duty.  The sash worn by the image of a suffragette in this 1996 Bob Dole campaign button states "Spirit of 76 years" alluding to both the patriotic sentiment towards the declaration of Independence in 1776 as well as the 76 years since women in the U.S. had been given the right to vote in 1920 (top left). 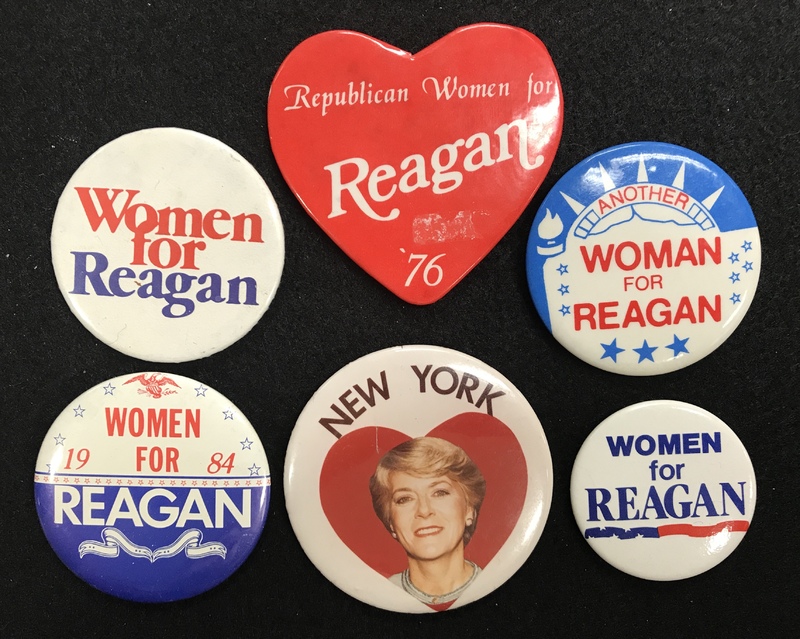 The straight forward approach is one of the most common buttons appealing to women, such as this 1976 "Republican Women for Reagan" heart-shaped button (top center). Of the "Women for Reagan" buttons in our collection the majority are from 1984 presumably to persuade female voters away from opponents Walter Mondale and Geraldine Ferraro (pictured bottom center), the first female vice-presidential nominee representing a major American political party. 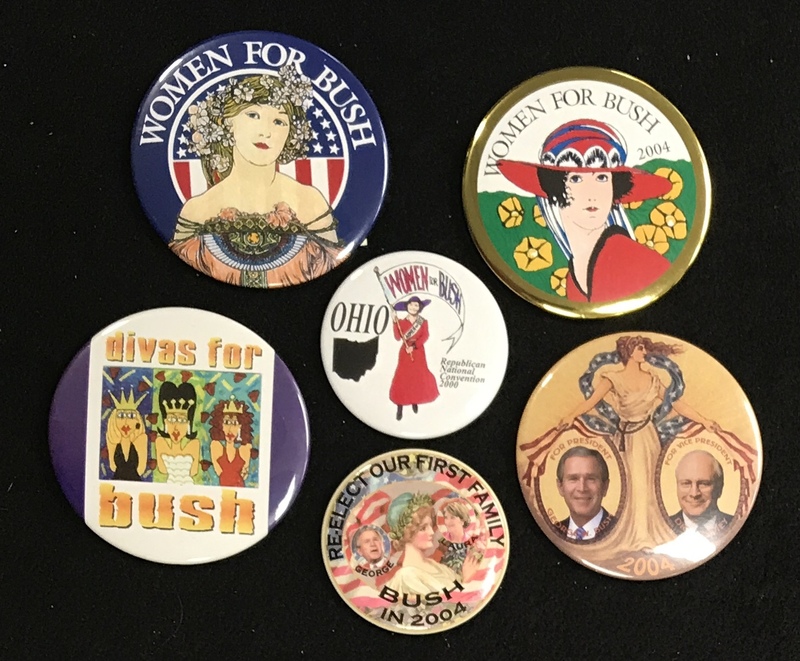 Among various forms of female iconography in our George W. Bush campaign button collection are images of suffragettes, personifications of Liberty, and the more whimsical "divas for bush" button. 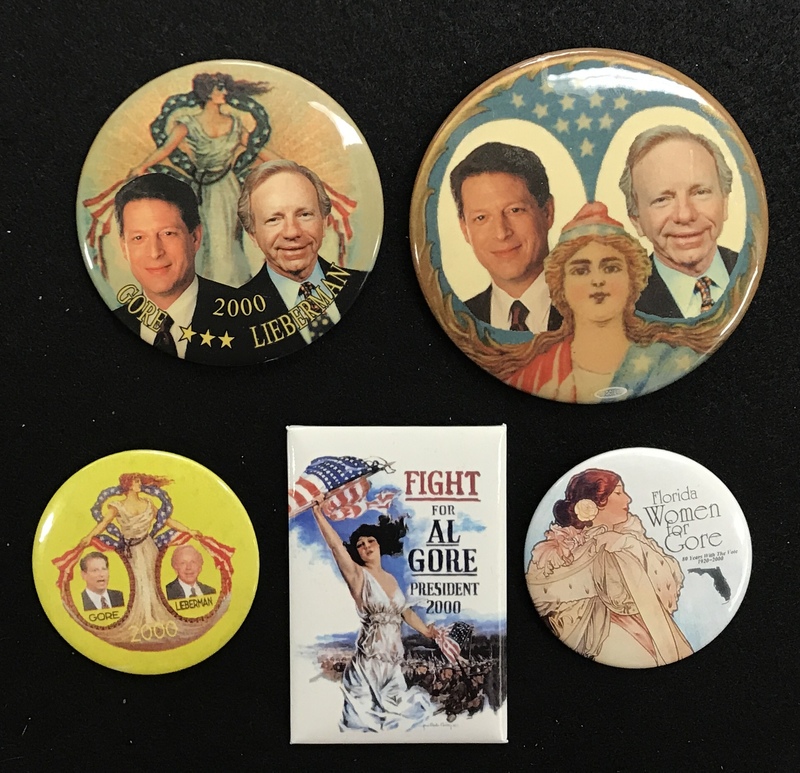 For the 2000 presidential election we see similar iconography with the Gore/Lieberman campaign as with the Bush/Cheney Campaign, with various incarnations of Liberty, and an image of a suffragette on the "Florida Women for Gore" button with the "80 years with the vote" subtext. 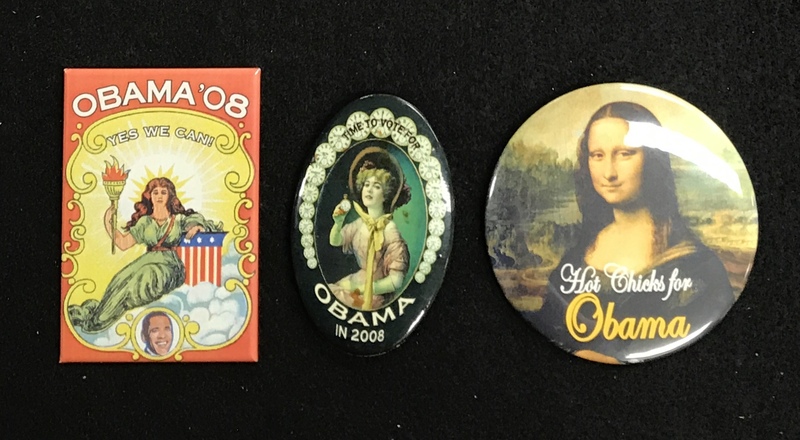 We see this pattern continue during Barack Obama's presidential campaigns, with images of Liberty (left) and a suffragette (center) and a whimsical "Hot Chicks for Obama" button with an image of Mona Lisa (right).