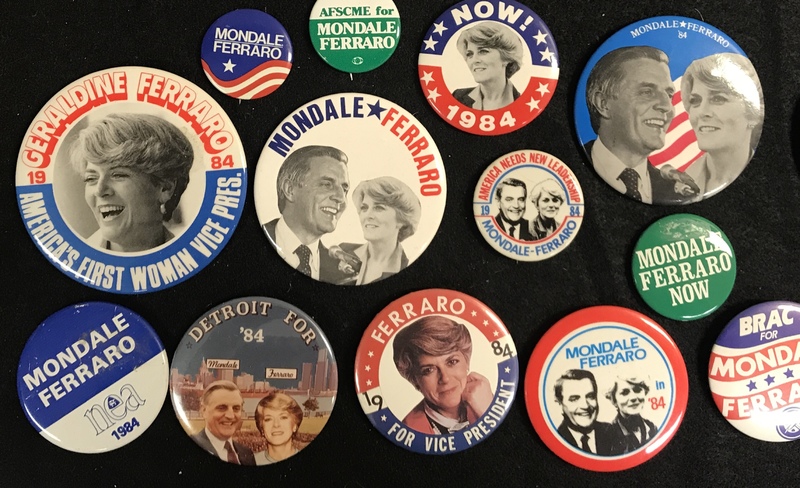 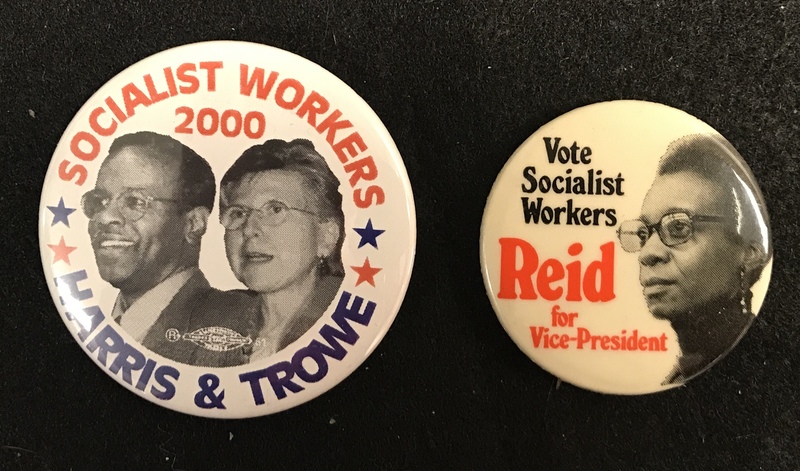 In our collection we have buttons from two female communist politicians from the Socialist Workers Party. Willie Mae Reid ran as vice presidential nominee on the Socialist Party ticket in 1976 (the campaign button is pictured on the right) with Presidential candidate Peter Camejo, and again in 1992 with James Warren.

Pictured on the left is a campaign button from the 2000 Socialist Workers Party campaign with Margaret Trowe running for vice president and James Harris as her running mate. 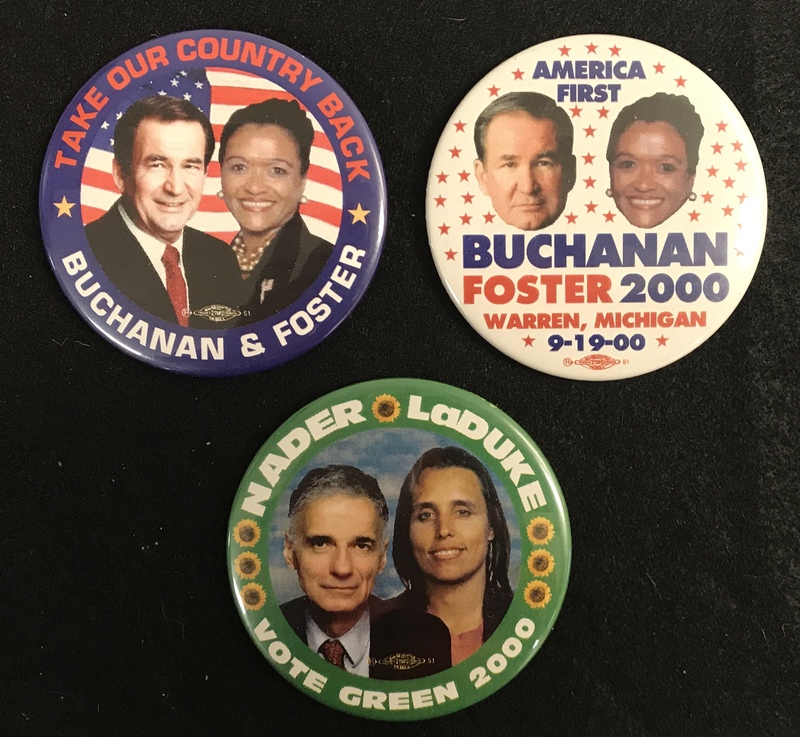 The 2000 presidential campaign was an active year for third parties. In our collection we have two buttons (top row) from Reform Party ticket with Pat Buchanan running for president and conservative political activist Ezola B. Foster running as vice president.

On the bottom row we have a button from the Green Party campaign with Winona Laduke, enrolled member of the Ojibwe Nation, running for vice president alongside Ralph Nader. In 2016 Laduke received one electoral vote for vice president, making her the first person in the Green Party ever to do so. She was not the first person of significant Native American ancestry to receive an electoral vote, which was Charles Curtis, member of the Kaw Nation, who was vice president of the United States between March 4, 1929 and March 4, 1933. 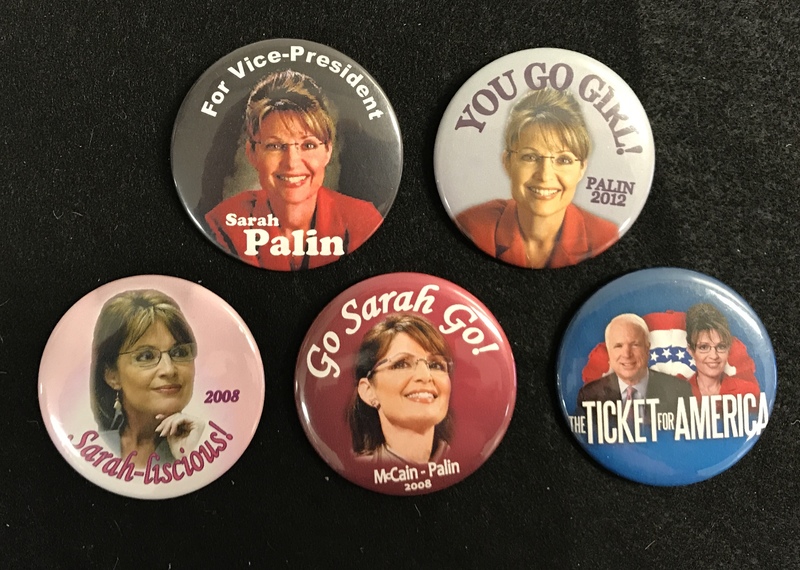 In 2008, running alongside Arizona Senator John McCain, sitting governor of Alaska (from 2006 until her resignation in 2009) Sarah Palin was the first female Republican nominee for vice president of the United States and second female vice presidential nominee of a major party (after Democrat Geraldine Ferraro in 1984). Some of the slogans from the campaign buttons include "You Go Girl!" (top right), "Go Sarah Go!" (from an early speculation for a run for president; bottom center), and "Sarah-liscious!" (bottom left). 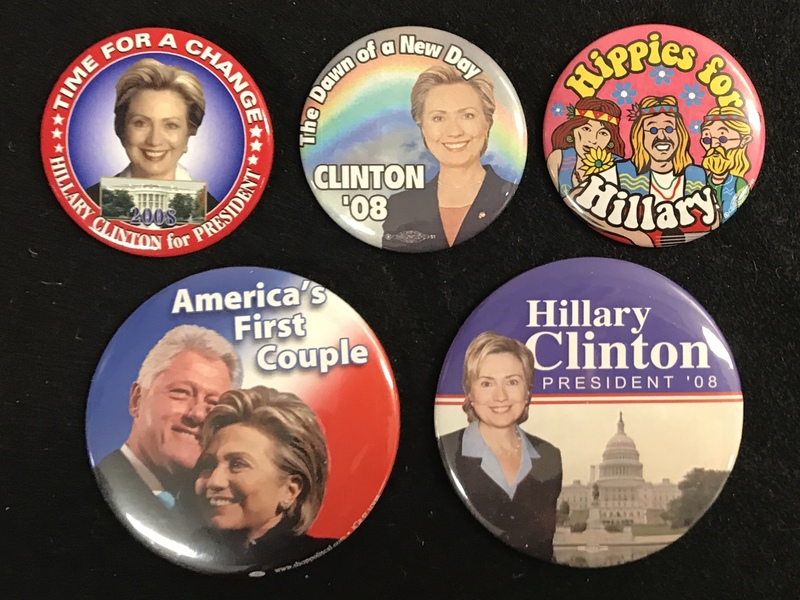 Former First Lady Hillary Clinton ran for president in 2008 and again in 2016. The second time becoming the first woman to be nominated for president of the United States by a major political party, the Democratic Party, but she eventually lost to Republican nominee Donald Trump.

These campaign buttons from her presidential campaign in 2008 (in which she was defeated by eventual Democratic winner Barack Obama) show a gamut of styles from the standard "Hillary Clinton President '08" (bottom right) and "America's First Couple" (bottom left) with Bill Clinton in the traditional spouse's 'supportive' standing position behind the candidate, to the more whimsical "Dawn of a New Day" (top center) with rainbow, and "Hippies for Hillary" (top right). 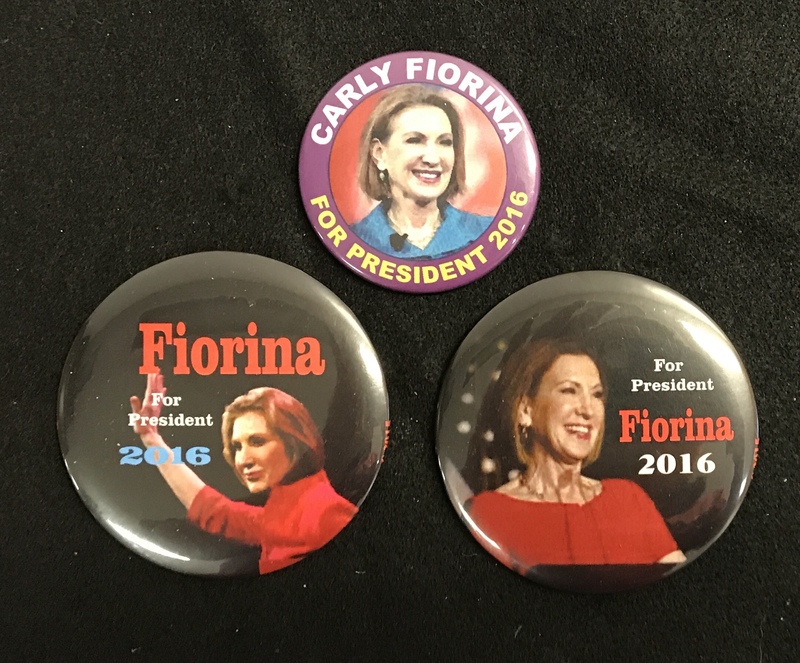 In 2016 Carly Fiorina, first woman to lead a Top-20 company (as ranked by Fortune Magazine), ran for President in the Republican primary but suspended her campaign in mid-February. Shortly afterward she joined the campaign of Texas Senator Ted Cruz as his vice presidential running mate, but he suspended his campaign six days later, making her vice-presidential candidacy the shortest in modern American history. 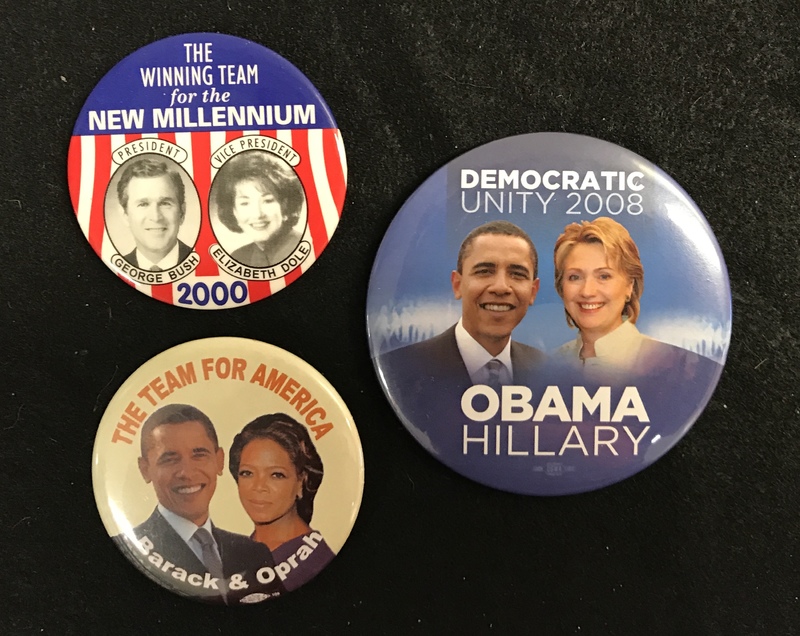 Also in our collection are campaign buttons of hopeful presidential campaign tickets that never came to be. In top right we have a button for George W. Bush and Elizabeth Dole. Dole had run for the Republican Presidential candidacy in 1999 but pulled out due to funding concerns despite polling well against opponents George W. Bush and Steve Forbes. Shortly before the 2000 Republican National Convention it was reported that Dole was on George W. Bush's short list for running mate. The list of potential candidates was created by former U.S. Secretary of Defense Dick Cheney, but Bush ended up passing up Dole picking Cheney as his Vice-Presidential running mate.

In early 2007 media mogul and beloved talk show host Oprah Winfrey endorsed Barack Obama ahead of his 2008 Presidential campaign. By December she made her first campaign appearances with him causing some to think she would be named his vice presidential nominee, as suggested in this campaign button (bottom left). By mid 2008 it became clear that Hillary Clinton would not clinch the Democratic nomination for president and speculation grew that Clinton might be named as vice presidential nominee (center right). The nomination was given to sitting United States Senator from Delaware Joe Biden.