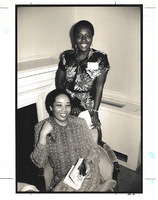 Elsie B. Washington (standing) with Vivian Stephens. (from the Romantic Times collection)

A native of Houston, Vivian Stephens came to New York in the early 1960s for a career in fashion, but ended up in publishing instead. In 1978, she talked her way into a job as an Associate Editor for Dell’s Candlelight division, but quickly found herself in charge when her boss moved to another division. Stephens used market research to revitalize Dell’s romance division and created Candlelight Ecstasy, a line with increased sensuality that featured more mature career-oriented women falling in love in less exotic locales.

Web of Desire by Jean Hager

The Tender Mending by Lia Sanders

It was within the Ecstasy line that Stephens published her new “Ethnic Romance” authors. In the end, only three of those authors’ books reached readers before Stephens departed for Harlequin, including The Tender Mending by the writing team of Angela Jackson and Sandra Jackson-Opoku; Golden Fire, Silver Ice by Marisa de Zavala; and Web of Desire by Jean Hager. 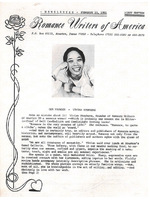 At a writing conference in 1979, a group of writers from Texas approached Vivian Stephens, seeking advice on breaking into what was then a very small romance market. Stephens urged the group to band together. The authors took Stephens’ advice, and the Romance Writers of America formed in December of 1980. Stephens served as an advisor to the group in its early years, even securing funds from publishers to help pay for the group’s annual gatherings.

Adam and Eva by Sandra Kitt

In 1982, Vivian Stephens moved to Harlequin to help the company establish its New York office and to launch Harlequin American, a line directly inspired by Stephens’ work with Candlelight Ecstasy. Stephens was only with Harlequin for a short time, but notably bought the first three books by Sandra Kitt, making her Harlequin’s first Black author. Adam and Eva was Harlequin’s first book with Black main characters.

In 1988, Vivian Stephens took up the pen herself and collaborated with journalist Angela Dew to form the writing team of Angela Vivian. The duo produced one book, Final Summer.