Information on the missionary work Dora Giffen did is rather scant in the letters she wrote home, which form the bulk of the written materials during this part of her life. This may be because her parents had been missionaries themselves, and so did not need to be informed of the day to day happenings of the work she was doing. Nonetheless, we know that Giffen was a teacher, and can speculate based on the collection that she taught mostly girls. One of the notable schools where she worked was the Fayoum Girls' School (see below). The first photograph is likely the faculty and staff of the school, which numbers a total of eleven Egyptian and American women. Another perspective on the work of mission schools may be seen through the Pressly Memorial Institute (PMI), birthplace of Dora Giffen in Asyut, Egypt. PMI was also a girls' school, located along the Upper Nile.

Giffen was also involved in more direct evangelization efforts, most especially during her time aboard the Witness, a ship sailing the Nile and making stops in various towns and villages along the way.

Finally, the American Mission in Egypt was also involved in operating humanitarian facilities, such as orphanages and hospitals. These facilities, as is often the case, seemed to be quite resource-poor. The orphanage run by a Lillian Trasher around 1920 had a number of children to care for, and seemingly only Ms. Trasher herself to help out. The hospital at Tanta sent out the brochure below around 1949 requesting funds for a massive expansion of their facility, the only such facility in the region. This is striking, considering the number of staff allocated to educational and evangelization efforts (which are closely related) at the time Giffen arrived in Egypt.

A group of Egyptian and American missionary workers in Egypt, probably in front of the Fayoum Girls' School.

The students of the Fayoum Girls' School, assembled on the front steps of that institution. 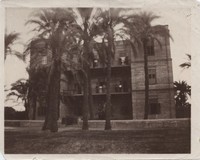 A building of the Pressly Memorial Institute, Asyut, Egypt, in which Dora Giffen was born in 1897. 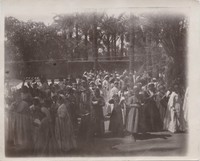 Students socializing in the school yard at Pressly Memorial Institute.

Students seated in the school yard of Pressly Memorial Institute.

Summary of the work of an American-run Missionary Hospital in Tanta, Egypt, with a request for funds for expansion of its facilities.