While many of the photos in Dora Giffen's papers speak to the more extraordinary parts of her time in Egypt- leisure time, travel around the country, and so on- some of the photos speak to everyday life, and depict the people of Egypt. Based on her letters, it does not seem that Giffen spent a great deal of free time with Egyptians. Instead, she seems to have socialized almost exclusively with other American missionaries. Nonetheless, she did interact with Egyptians, mostly Protestant converts and her language and culture teachers, and they are reflected in her papers. The lives of Egyptians also come through briefly through Giffen's remembrances of her travels on the Witness down the Nile River.

Beyond these images of the people, Dora Giffen took many photos of what she felt were average street scenes and buildings in Egypt, as well as the annual "Inundation." This latter event is the flooding of the Nile which occurred each August for about three weeks. This was a major event each year in the lives of Egyptians, and had a significant effect on agricultural cycles, which ended only with the construction of the High Dam at Aswan in 1970.

Shiekh Mustapha, likely an Egyptian Arabic language teacher who worked with American missionaries and other Westerners, pictured with his wife and children. 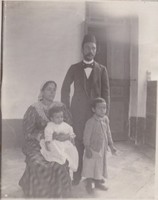 A photo of an Egyptian Protestant pastor, Rev. Morad Sitt Farclous, his wife, and their children.

A group of Egyptian and American women at the Nile River washing and gathering water. 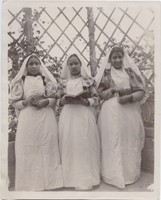 A house in Mansourah, Egypt. 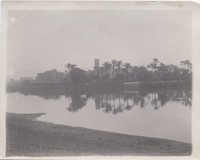 The Nile River at Asyut, Egypt at the time of the annual Inundation.

A street scene in Mansourah.

The tomb of a Sheikh in Fayoum, Egypt.