The Center for Women and Gender Equity at Bowlnig Green State University was opened to the public as the Women’s Center on Tuesday, September 1st 1998 in Hanna Hall. Founder of the Center, Dr. Mary Krueger, had visions of providing services to everyone in the community. Dr. Krueger addressed the specific goals for the center stating, “What I would like to see the center become is a resource referral; an informational clearinghouse; an advocate for career and personal issues for women-identified individuals including a physical space where women can go that is open, accepting, physically safe; a haven from stress where people can relax and be themselves and talk about things that matter to them.” She found through her early work that there were a variety of topics that needed to be discussed such as pay equity, child care, and sexual harassment. These topics were not currently being addressed throughout the campus and she wanted that to change.  Dr. Krueger spoke to the work of the Center in the larger campus community stating, “we’re not just for women, we’re just about women”.

Photographs of office space that became the Women's Center 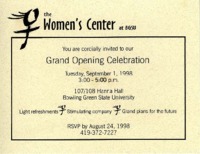 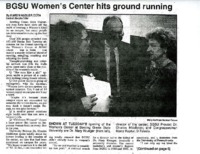 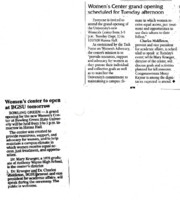 Two articles about grand opening of Women's Center, circa September 1998