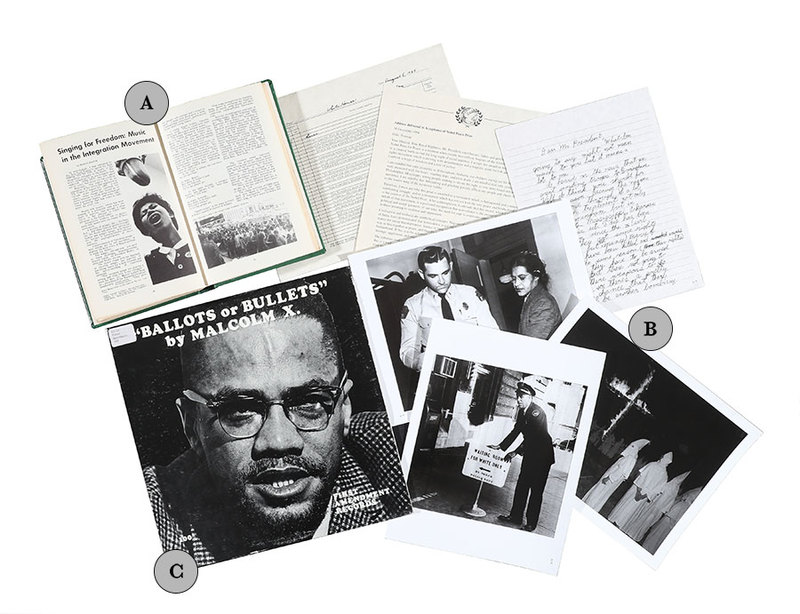 Sing Out!, a folk-music magazine devoted to preserving cultural diversity and heritage through music, was instrumental in documenting the folk scene as it supported the Civil Rights movement. This issue illustrates the power of music in a feature story about music's role in the Integration movement. As Robert Shelton notes, "A new tributary of 'freedom songs,' bold words set to old melodies, is making the deep river of Negro protest in song run faster."

Eight striking photos tell a story of struggle. Among them, Rosa Parks, who stood up when told to sit down, is fingerprinted; brave protestors sit, focused and resolute, at a Woolworth counter; a gathering of Klansmen stand menacingly in front of a burning cross. Joining these images: a poster that advertises membership to the NAACP; a child’s letter to President Kennedy about the Birmingham church bombings. This collection, curated and created by teachers, helps us confront the painful history that informs our present.

Released after his death (and with proceeds paid to his widow, Mrs. Betty Shabbazz), this album includes a version of Malcolm X's talk, "Ballots or Bullets," as delivered in Detroit, Michigan in April of 1964. Noting the importance of that election year, he encouraged African Americans to vote as a bloc to increase their collective power at the ballot box. In his encouragement to attendees to elevate the struggles of the Civil Rights Movement to the level of a human rights movements, he presaged conversations we are still revisiting today.